I spent most of yesterday figuring out how to add some vertical siding to the house.  And exactly where I wanted it to start.

I could not get past the horizontal lap siding over the porch, so that had to go.  And I figured the upper portion of the house would also need vertical siding.

So with some cursing, sanding, prying and a lot more cursing I managed to replace the horizontal lap siding with vertical siding in the appropriate places.  Then I painted.

I also painted window trim and the exterior portions of the windows.

That was Saturday.  Lots of work.

So today I started out with something that I knew I'd like.  I painted the front door.  I love how the Cascade color pops against the Nautical and Warm White.

And I did a test run of the trim and the windows before I began to paint the trim.

Here's a couple of shots of the whole shebang. 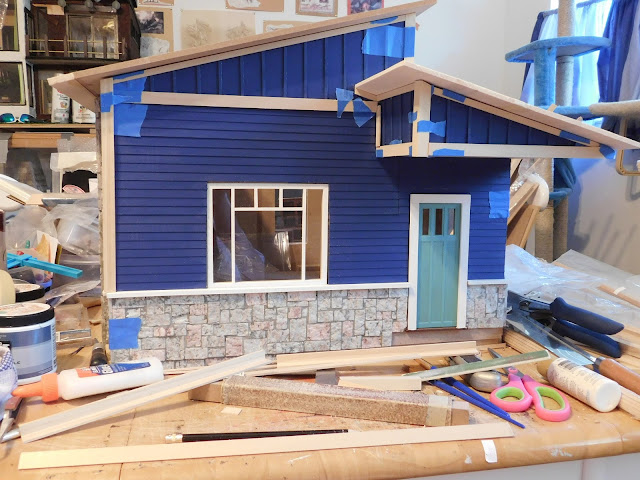 I'm so happy with that front door I can't tell you.

Granted, it is hard to get the full effect of the trim with the painters tape everywhere but I didn't want to mess something up. 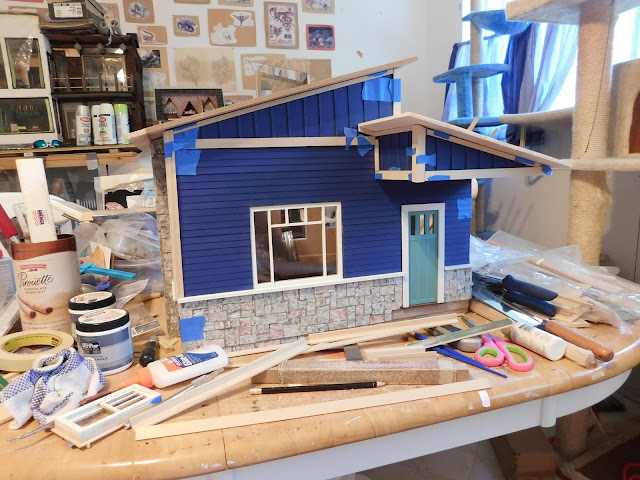 I'm debating some roof braces/corbels, maybe one at each side of the roof extended from the corner trim?   Or would that be too much?

So far I've only got the trim for the front cut, I need to do the back and sides.

But I did cut out my bathroom window glass so I could test it. 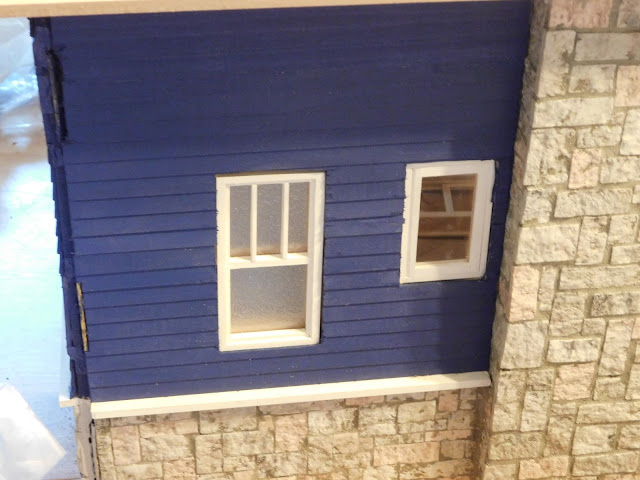 I'm debating with myself on these small side windows.  Do I add some mullions and divide them up?  The ones next to the chimney...I could possibly divide in two, similar to the bathroom window and then divide the upper portion into three panes.

I'm worried they'll look too busy.  But without some sort of detail they look very plain to me.

The horizontal sitting loft windows would actually be easier, just divide the existing pane into three with a couple mullions added.

I actually painted the exterior window trim and then had to stop from gluing it on because I need to add some wood so the window depth matches the wall depth.  With the siding on the windows don't extend to the exterior.

And while I was thinking about that I realized that the window trim really doesn't look very 'Craftsman'.  All the trim that comes with the windows are cut at forty five degree angles to make a nice little frame around the window.  A picture frame style trim.  That's fine for a regular house.

Craftsman windows tend to feature a slightly wider head to the casing with straight lines, very few diagonals at all.  They'll often have a crown to the head as well.  Like so. 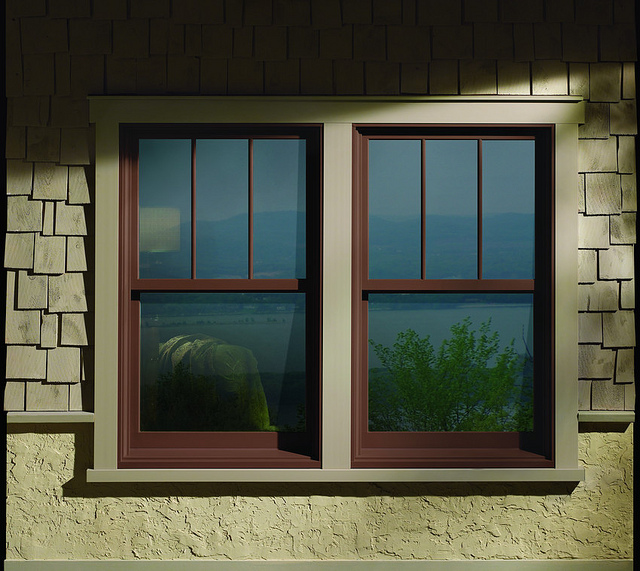 It's not huge but it does make a difference to the eye.

Since I'm busting my butt to make this house look more Craftsman not less, part of the painting I'd done was wasted.  So I've got my work cut out for me.

At least I hadn't glued anything on before I came to this realization.

I also realized that I do need some type of under the eaves trim as well.  Definitely need a frieze board and I want some rafters to show for certain.

I'd love some opinions on the windows and the idea of corbels or braces for the roof.  I don't want it to look fussy.  Clean and classic is the idea.

Ah well.  Back to measuring and cutting.