After a few moments of absolute panic when I realized I had less than four months to finish this house I got to work this week.

I did a mockup of how I want part of the upper floor to look.  Got the walls up, the floors constructed and took a few pictures with the sliding door in place.  I need to build the outer walls of the squared part of the house.  That should be interesting as they'll be mostly plexiglass and that's always an adventure to deal with.

I'm debating a small door from the master bedroom to the upper balcony.  I might skip it simply because it could be a pain in the butt.

Here's a very sketchy preview of how part of the house will look though.

﻿﻿﻿
I also finished off the foundation with the brick paper I purchased a while back.  It has an actual texture to it and a mix of dark grey and tan colors so it'll look good with the dark wood and off white stucco.


And then I finished off the wooden porch edges with some brown paint.

And since the upper floor really will just fall in if I don't have the lower supporting walls done I started work on the half bath under the stairs and the stair case.

I made hollow walls out of some thin basswood and balsa 'two by fours' and ran wire through them so I could have lights in the upstairs bathroom and a wall light fixture in the half bath under the stairs.


And I put wallpaper on the walls.  It's actually scrapbook paper from Michael's.  It has a nice subtle design and its a pretty off white that's not too yellow.  It'll go well with the floors.

The other thing I did was take out a couple of the upper door panels and replace them with some very thin frosted plexiglass.  That way the bathroom will get some light from the front windows.  I hope.

For a little pop of color I mixed my apple green paint with a little white and muted the color somewhat.  Then I painted the trim that color.  It'll go inside the bathroom so its a nice little pop without taking over the room.

The stair case is...interesting.  I mentioned I wanted a 'Brady Bunch' staircase but its impossible to have a half bath under it without risers.  So I stained the treads the same dark walnut as the front porch flooring and sanded them, then applied another layer.

The plan is to leave the rest of the trim in the house, baseboards, doors, windows and any crown molding its own natural wood tones and seal it with satin polyurethane in order to make the stair case really stand out.

So the risers are made out of woodsies and the treads are one inch by eighth inch boards cut down to hang out over the wall slightly.  The landing is made the same way, with the boards glued together.

Once all the glue holding the treads and risers is dry I plan to finish the entire thing all at once.  Hopefully that'll keep the finish from looking uneven.

The lower part of the staircase is pretty cool and I'm hoping to have it done soon.

That's most of my progress for the weekend and quite a bit of during the week too.

I'm working on a light fixture for the bathroom, not too thrilled with how it looks at the moment but I'm working on it.  I need to get the lighting for the kitchen decided on and that'll be a job and a half but once that's done I can start worrying about the upper floor.

It occurred to me that I really had no excuse for not posting pictures and progress of my contest house to the blog.  It's not like I have so many followers that someone will see what I'm doing and steal the idea.  I'm also pretty certain that my idea is not so original that it would be instantly grabbed.

So I started out with this as my inspiration picture.


I really love the contrast of the curves and angles.  I can't recreate this perfectly but I can get the look.  And I wanted a two story house with a roof garden area.  Or at least a roof patio.

So I got my baseboard and build my foundation.

You'll find that since this is the first 'from scratch' house I've built that I've goofed some things up.  For instance, I put the subfloor over the foundation without running the wiring first.  Not well thought out.  But that's what wood putty and glue and stuff is for.
I was pretty definite that I wanted an attached garage, which is why the foundation doesn't cover the entire base.  I did remember that I needed a place to hide the wiring though.  Yay! 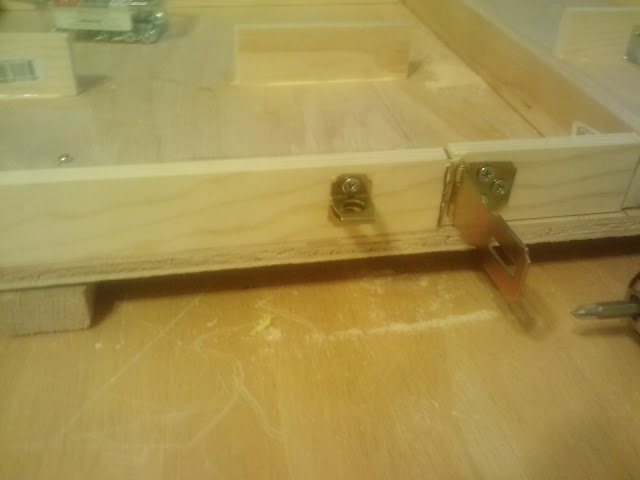 And I messed around with ideas for the flooring.  The tile shown here has a nice sorta khaki green along with creamy brown, beige and gold...Very modern and it'll go nicely with all the colors I have in mind.

I want a sort of Brady Bunch house staircase, but without it taking over the entire room.  Seriously the living room in that house seemed tiny with that staircase taking over.  Great focal point, awful function.
The sectional couch is nice but it also takes over so I have something else in mind for the living room now.  I want a very modern look. Angles and curves, like the outside of the house too.
Toward that end, I started to work on my walls.  Lots of windows.  That means lots of plexiglass cutting... Always makes life interesting.
I had the idea that I'd make some of my walls, interior and exterior, hollow so I could run wiring through them.  I did that with the walls that surround the stairwell and make up the bathroom and that'll make it easier to run wires up to the second floor without trying to hide them in beams or under wall paper.
I'm going with round wire here, rather than tape wire because tape wire was so awful on the Bungalow.  I might be brave and try it again but between the tiny brads, the tape wire breaking and the bulbs burning out from testing... yeah, not thrilled with it.
Here's another look at the first floor walls.
Then I got the bright idea to work on the garage and front porch.  Mostly inspired by some things I found at Hobby Lobby.
The 'two by four beams' are just balsa wood, glued to resemble the framework of the garage.  The back wall is on hinges so I can open it to paint and do the wiring for the upper and lower floors.

Experience with the building inspector (see below) had led me to believe an enclosed dollhouse is the safest dollhouse.

﻿
Especially as she's convinced her little brother that dollhouses are the most awesome things and that they're hers.  Again, see below.

﻿
So I've gotten the idea that I want to enclose this house completely.  I can't stop her from sitting on top of it, but I can try to keep her from getting inside.

﻿
Picture taking was a bit sporadic for a while, I was so busy doing I forgot to take pictures.
But here's some of the end results.
The front porch is wired and the porch lights created.  Made them out of drawer pulls, believe it or not.  The round glass knobs were perfect once I took out the screws and I love the globes contrasting with the dark angled wood around them.
All three of them in a row...
And here we are, all lit up...
Here are a few pics of the furniture and the layout now that I had walls up.  Funny how walls make the rooms seem smaller...
Then it was time to start (at the very least) working on the layout for the second floor.  ﻿I had to cut some of the length off the curved walls and add the notches again.  I cut the length off the back of the walls so I could keep the high ceilings I associate with modern houses. 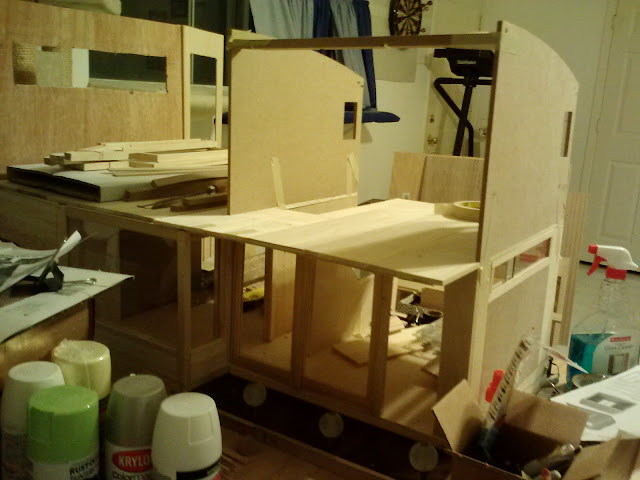 I also needed to shorten the width a little, or the cube/curve layout would be goofed up.  And while I was waiting for the glue to dry and figuring out how to run the wires up to the second floor, I decided to work on the garage.
I bought stain and paint, a nice weathered grey stain for the 'beams'  and a walnut for the eventual use on the wood siding of the house.  Inside the garage I used a chocolate paint, watered down a bit to get a slightly aged look.  Once I stained the beams I sanded them lightly so they wouldn't look too thickly painted.
I found the most awesome light fixtures on Mainly Minis that look like bare light bulbs.  Perfect for the garage or an attic.  I drilled a little hole for the wire into some of my channel beams and glued the fixtures on.  Love!


﻿
Then I painted the garage door and glued the beams in place, after getting everything wired together.  Wow... mental note, go get more electrical tape.  I don't have a soldering iron so I have to use tape.

﻿
I'm not entirely sure about the paint/stain on the wall above the garage door...looks odd in this light.  I think it needs another coat of brown.
﻿﻿

The rest of my progress... well not really picture worthy.  I'm actually a bit excited because I think I figured out a way to get more wiring up the stairs.  But I need to build the rest of the outer walls before I can do the inside.  And I've got to stop at Hobby Lobby and get more drawer pulls.  And bronze jewelry findings.
But that's what I've got so far...  Hope you all have enjoyed this.  I'm planning on getting more done this weekend.
﻿
Posted by Sheila at 8/21/2015 09:25:00 AM 4 comments: