To Shingle or Not To Shingle?

Well I've been enjoying my break from the insanity of non work related deadlines.  I painted the roof of the Fairytale Cottage and stared at it for a while.  I like the dark...just don't like how all the definition of the engraved shingles disappears with the paint.


So I stared at it for a week or so.  I tried using pen to outline the little imprints of the fish scale shingles...but that didn't really help.  You can barely see them.

So I figured, what the heck, I've got an angle cutter now and a better glue gun, let's dig out the left over shingles from the Gothic Victorian and see how this goes.  It's also a much smaller roof.  You'll notice I'm not talking about shingles with any of the large houses I've got.  Though the angle cutter makes all the difference. Love that thing!

So here's an in progress shot.

Did I mention I had to dig through half a ton of dollhouse stuff on my desk to find the glue gun?  Yeah, a major organizational overhaul is needed.  But not today.

So I kept shingling and by Sunday afternoon I was done.  I didn't even run out of shingles and that was a concern for a bit.

Still not loving the color though.  Too much brown in it.  So out came the black paint.

I used an old bottle and watered it down because I didn't want stark black. Just enough of a tint that I got that contrast with the stone walls back. 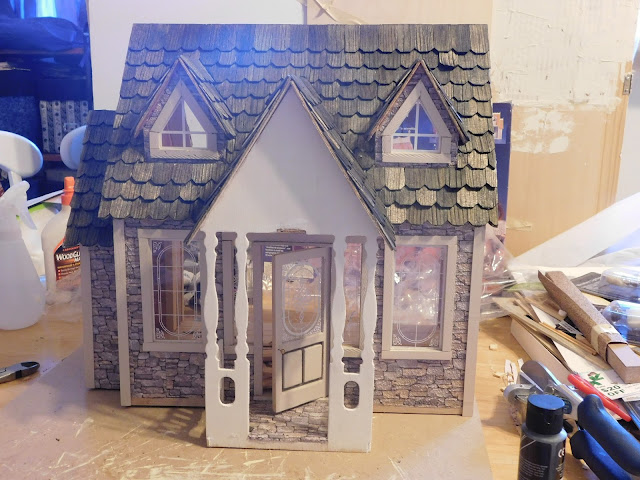 I'll live with it a while and see how I feel.

By the way, these pictures, all taken with the new Nikon camera that was my Christmas gift from my husband.  Isn't it nice how they're all in focus?

In other news, Cap'n Jack our kitten has grown and gone to his first 'Big boy' vet appointment.  He now weighs fifteen pounds.

In order to give you some idea of his growth, here are some pictures of him about a month after we found him.  Sitting next to his brother on the couch.  Very sweet.

Here's a couple of him with his sissies.  He still adores them.


Now we have year old Cap'n Jack.  Slightly more graceful.  And a lot bigger.  With his brother.


That's Jack who's nearly falling off the cushion.  He's the original slinky cat.