Ever Have One Of Those Months?

I have this thing... I like to sort of plan things out.  And if I'm real ambitious draw them or bash something into making them happen.  But every now and then something stalls me and I get a bit paralyzed trying to figure out what to do and how to make something happen.  I have so much information I can't decide because I worry about making the wrong choice.

It didn't help that my husband and I are setting a new household record for sinus problems.  An issue which has not abated one darn bit.  (Thank you North Texas, I hate you right back.)  And I spent most of my time on the couch looking at pictures of what I want to do.  I had no energy and when I did start thinking of my build my brain went in so many directions I immediately got overwhelmed and sat back down on the couch to think some more.

March has not been a productive month to say the very least.  I don't think I like March anymore.

So I started working on the fireplace.  And I was pleasantly surprised to have it going well.  So I started on the built ins on either side.  One of them has to fit up against the window seat cabinets and the other has to fit against the bathroom wall.

After a few miscalculations I got something working.  Obviously the fireplace isn't finished yet. I need to add another beam with some detail above the tile and just under the mantle.  I also have to finish the hearth, build and finish the chimney and back of the fireplace but I'm feeling pretty pleased with how it looks so far.


Obviously still some work to do, but here's how the window seat built ins will fit up against the side of the fireplace shelves.  I want to find or make some long fireplace matches in a fancy box to go in that tall skinny space. 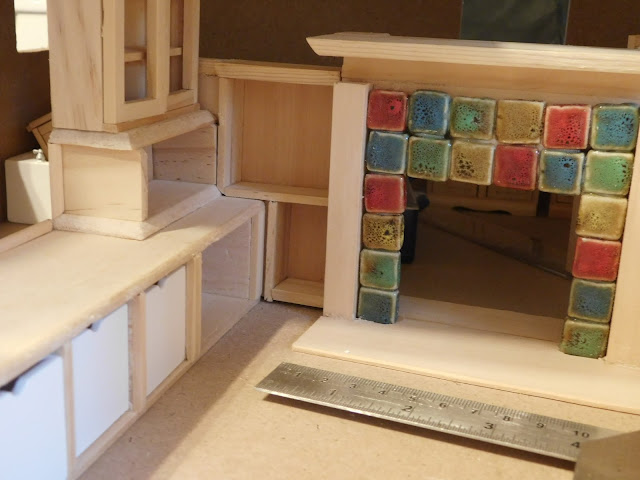 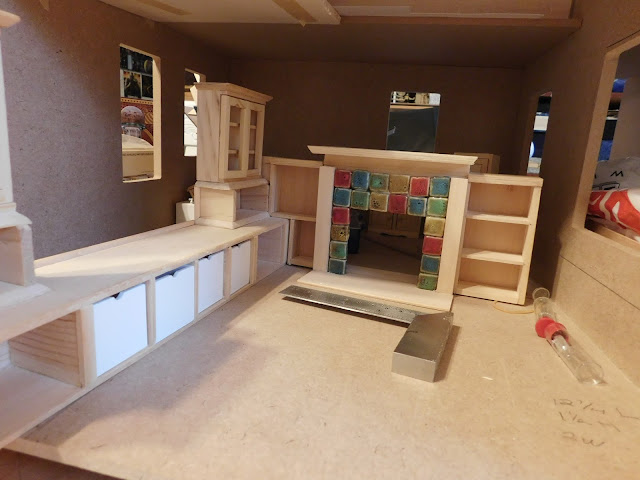 I'm planning on staining the woodwork a nice oak or a golden cherry. Not sure yet.  But I'll paint the storage containers in complimentary colors rather than leave them stark white.

I still need to glue everything into place and then it'll sit for a bit while I figure out how to hinge the wall.  I'll put in flooring and then glue the bench into place.

I'm curious as to whether or not I should do a hanging barn style door or a pocket door to the bathroom.  I don't want a standard hinged door because it'll take up a lot of space.