This was a weekend of 1:1 scale house projects, such as putting up a new curtain rod, hanging a new door for the bathroom, and a lot of little things for the 1:12 scale house.

I'm sure the 1:1 scale stuff isn't as interesting to you as it is to me.  The projects were mostly fixing things that got destroyed by cats or destroyed by humans to rescue a cat.  Sadly the window shelf was not one of the things that got fixed, mostly because I cannot figure out how to reinforce it and I don't want an even dozen holes in my wall.  Half a dozen is enough I think.

The Nola house progresses.  As I mentioned last time, I distressed the stair treads so they'd look as if generations of tiny feet had trod up and own them. 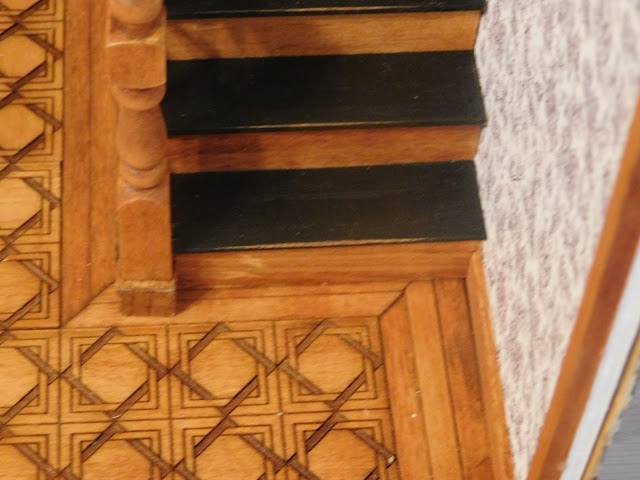 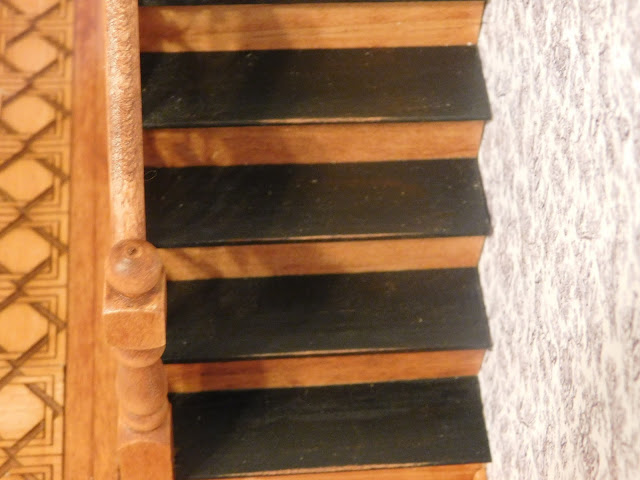 I sanded the treads down a bit then used the American Cherry stain over the black.  It contrasts nicely I think.

I also, as you might have guessed from the shot above, put wallpaper and trim on the staircase wall, and attached the staircase.  I decided against the wainscoting on this particular wall because it felt too busy. 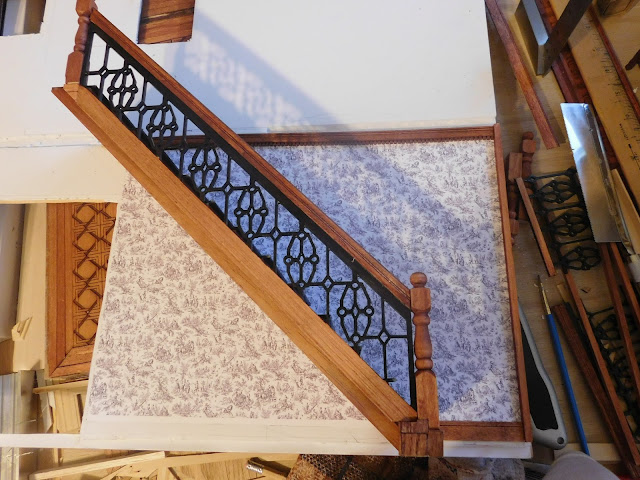 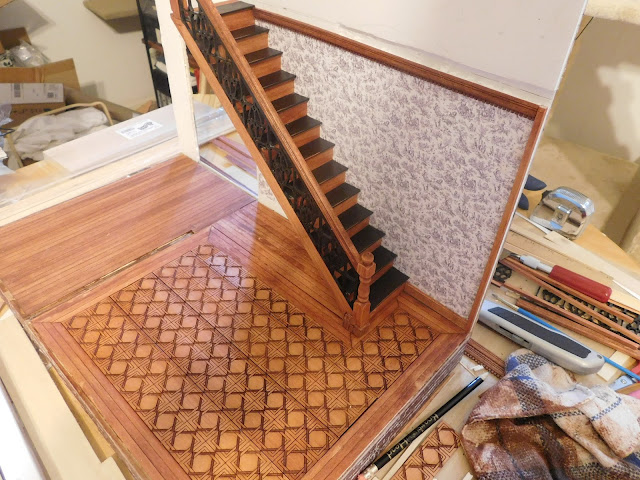 I put up some of the wallpaper for the kitchen wall.  I'm planning on adding trim around the door which will serve as a visual room divider. 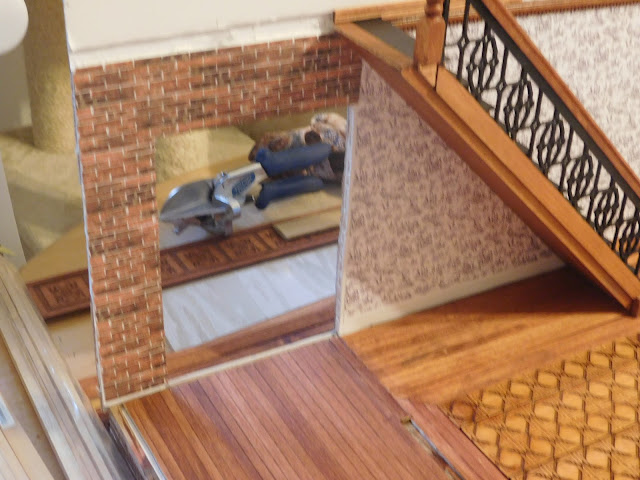 I like how the brick looks with the walnut floor.  I think it'll contrast nicely with the black fridge I bought and the simple cabinets I'm going to make.

I also did some work on the front door.  You'll recall from my test run of how all the doors and windows fit that it was unpainted so far.  That was because I couldn't decide on a color.

I wanted something dramatic to stand out from the other grey blue doors.  Something that would look good next to the white trim and not clash with the pale grey house walls.

Here's what I ended up with.

And the interior side of it.

There was a lot of taping and very careful painting of this door.  In the end I'm pretty pleased with how it came out.

I also put a coat of finish on the beadboard ceiling, carefully avoiding the lighting brass.  I trimmed out the stairs opening so it looks pretty for anyone sitting in the living room.

You can see my little domed kitchen light, the Reutter Porcelain dining room light and my little entryway hanging light.  The dining room light killed me for ideas to trim it out until I remembered how people would cover wires with satin or velvet tubes. 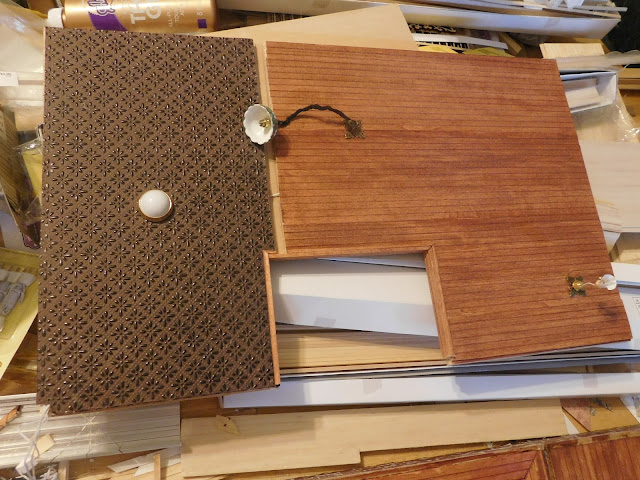 Here's a close up of the dining room/Reutter Porcelain light.  I liked the touches of red without the color overwhelming. I'm starting to get the exterior trim ready, painting it black and adding the crackle medium.  I'll add the topcoat today I hope.

The other thing I want to accomplish today is figuring out how to trim out the windows interior.  I need to make those tiny crossbars and the curved upper portion.  I'm planning on the crossbars being black, and maybe the curved portion cherry or walnut depending on the room.

Lots to do still.  Can't believe we're almost done with May!

I feel pretty good about what I got done this week.  A lot of staining, some glue work and then more staining.

I also did a test run of how the windows and doors look in the walls when the house is partially assembled.  This is going to be a picture heavy post so apologies in advance.

I got the front room floor laid out and glued into place and then stained with the American Cherry stain.  I'm pretty pleased with how it looks. 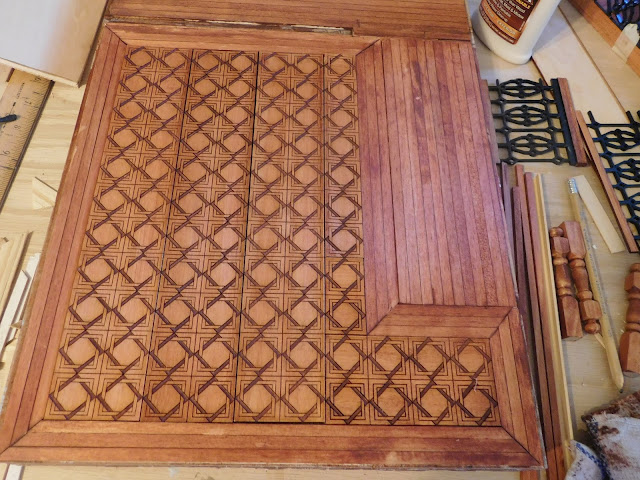 I haven't added the finish yet but I'm pleased with how it looks.  A little worn in places and not quite level, like the underflooring isn't as sturdy as it could be.

I added the flooring for the kitchen too, and used a walnut stain. 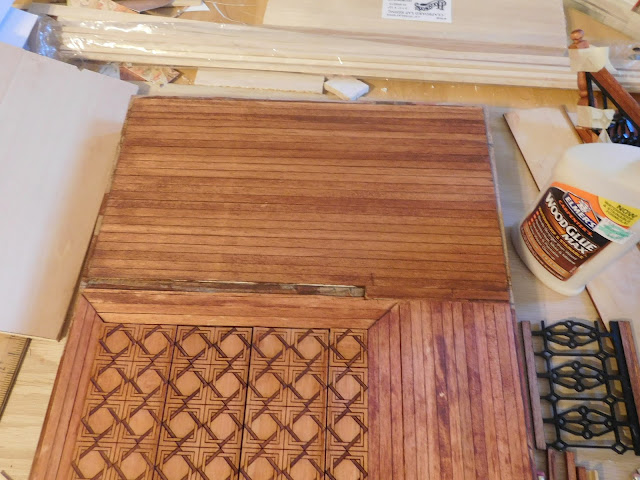 I also attached the railings to the stairs and I really love how it looks. 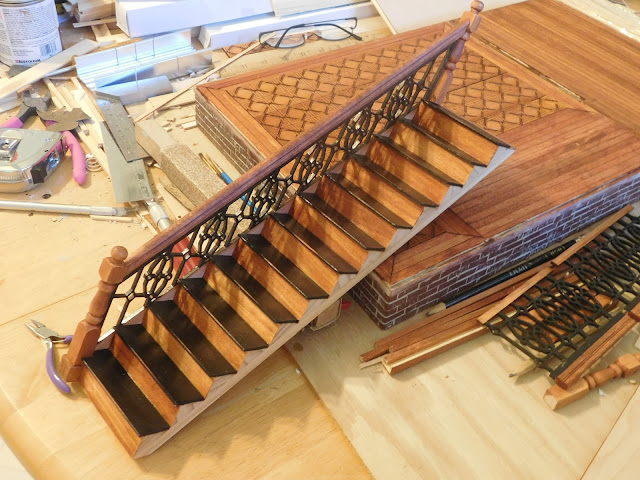 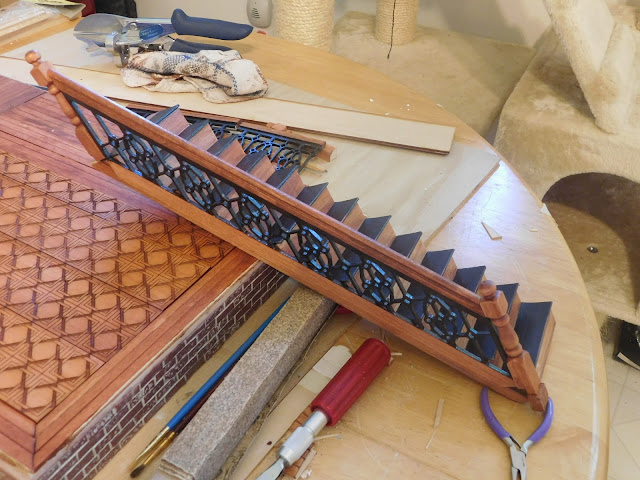 I worked on the second floor too.  I think it looks pretty good. 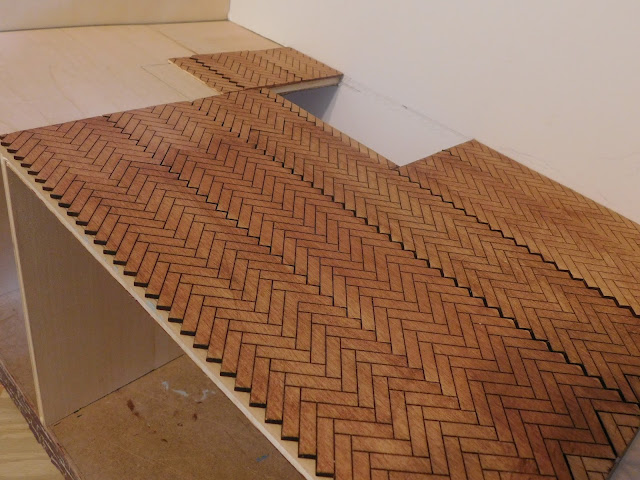 I need to add another layer of stain and move a few pieces around but it doesn't look bad. 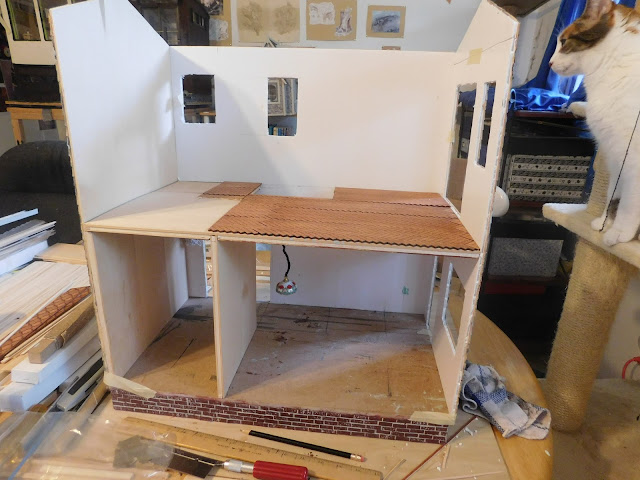 A look at the ceiling for the first floor. 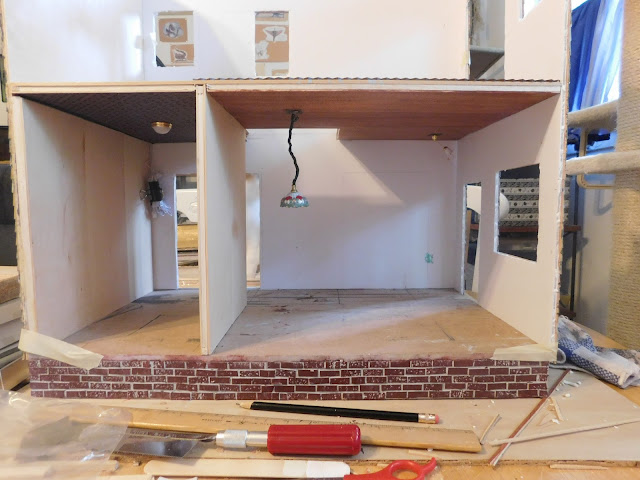 And a look at how the windows and doors look. 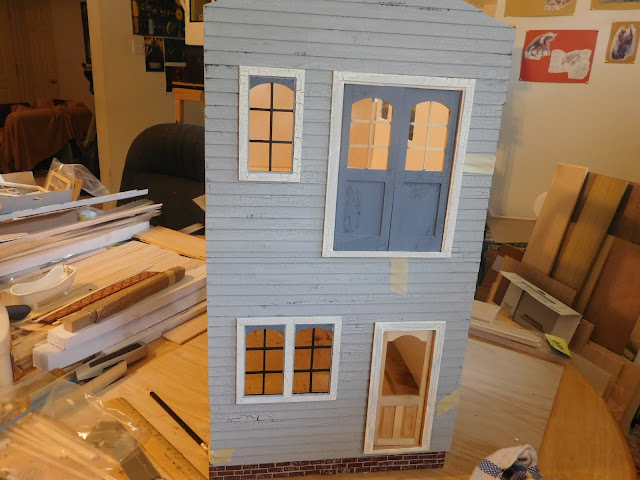 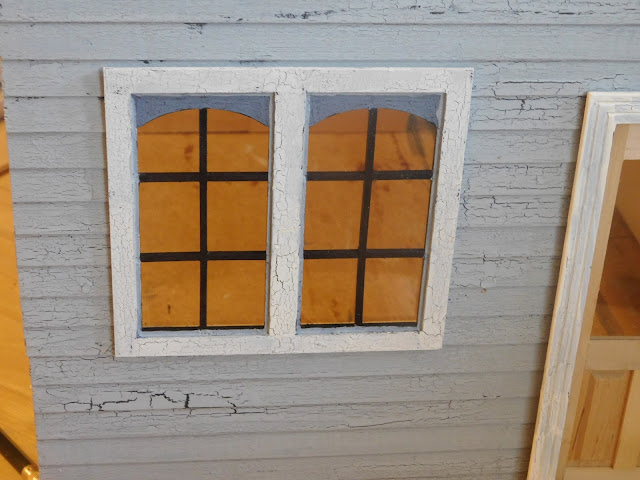 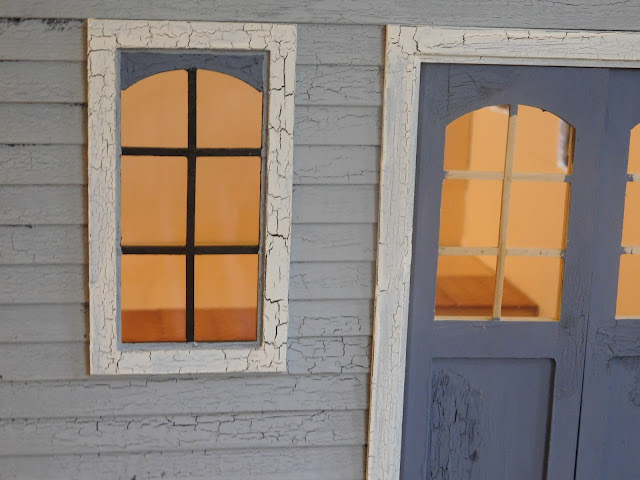 And that's all for the day.

Sorry it's been a couple weeks folks.  I've been working, I just haven't had much that's terribly noteworthy (or picture worthy) to show you.

I have been looking into a lot of the different ways staircases, railings and wainscoting are used in traditional houses and more modern ones.  It seems as if there are as many ways to trim out a room as there are houses out there.

But since I'm going with a more traditional (only slightly updated) two story shotgun house, I decided to not go with any really modern touches like crown molding that matches the wall color.  I actually want the house to feel a little dark in the front parlor/dining room.  Like it's slowly being updated but only as the owners can afford to do so.

You know, patchwork redecorating.  The kind of thing you have to do yourself by watching design shows and following DIY bloggers.

So with that in mind I stained the floors and the wainscoting a gorgeous cherry. 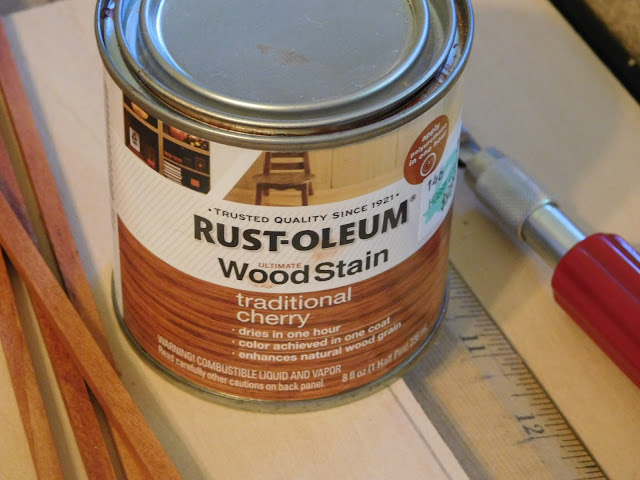 The nice thing about wood stain is that the color varies so much depending on the wood you're staining.  So the wainscoting turned out a bit darker, the floors both light and dark and the ceiling a really rich color in between.


The wainscoting, flooring and stair railings are all from Alessio Miniatures.  I went with a metallic black on the spindles/filigree of the railing to mimic wrought iron.  And the same cherry stain on the base and handrail and stairs.  Let me tell you, masking tape/painters tape is my friend.  My good good friend. 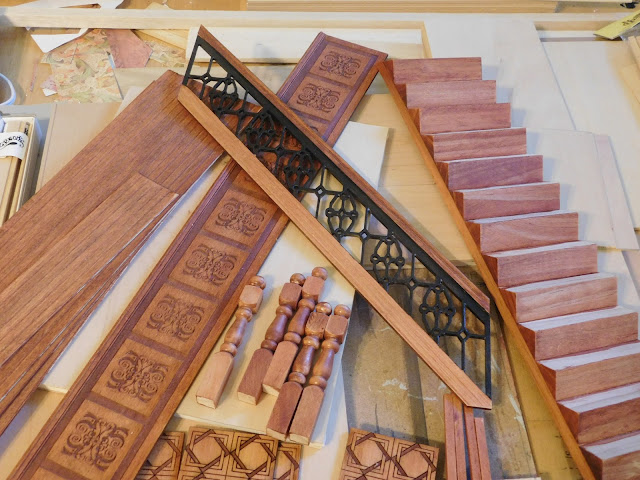 It's hard to see in the light, but the poly finish I used to seal the railing really makes it shine like metal.

Then I went with black treads on the stairs.  I've finished them and after I'm sure everything is dry I'll age the treads a bit more.  Some sandpaper to wear away the paint and finish a little bit will do the trick I think. 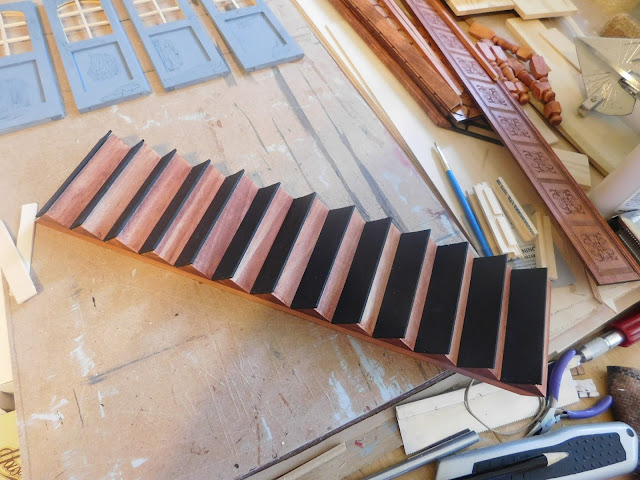 As you can see in the picture above, I've also been working on the trim for the exterior.  I had to go buy more black paint but once I got all of the windows and trim painted black I really needed it.

I decided that I didn't want the doors to be completely weathered and worn so I put the black paint down in different places.  Then I used my crackle medium on everything I'd painted black.

Waiting for it all to dry was the hardest part.  Waiting gets me every time.

But finally got to add the white paint to the door trim and the window trim.  I used a Folk Art Acrylic Paint 'Cloudy Day' on the doors and on the curves of the windows.  Then edged the windows in the same grey as the exterior of the house.  Once that was done I used metallic black paint on the window crossbars.

I liked the result on the doors a lot.  They look like the paint has started to peel in some places more than others.  And to me it looks like someone's been spot painting the doors for years. 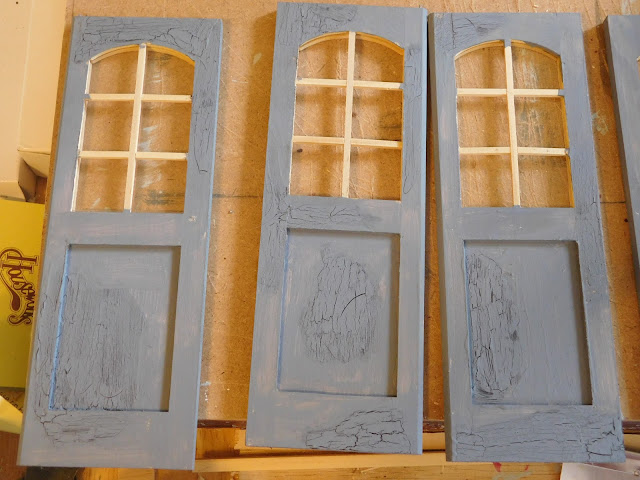 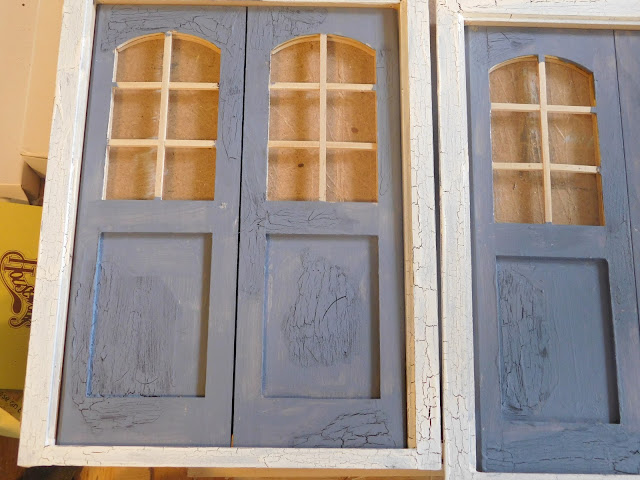 I especially like how they look with the peeling white trim around them.

And the windows turned out pretty well I think. 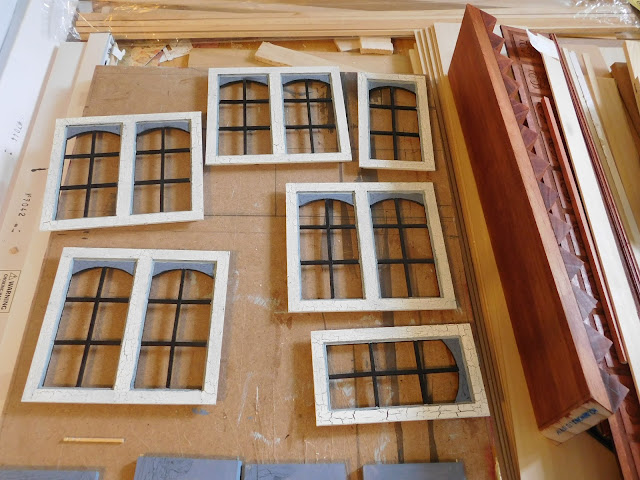 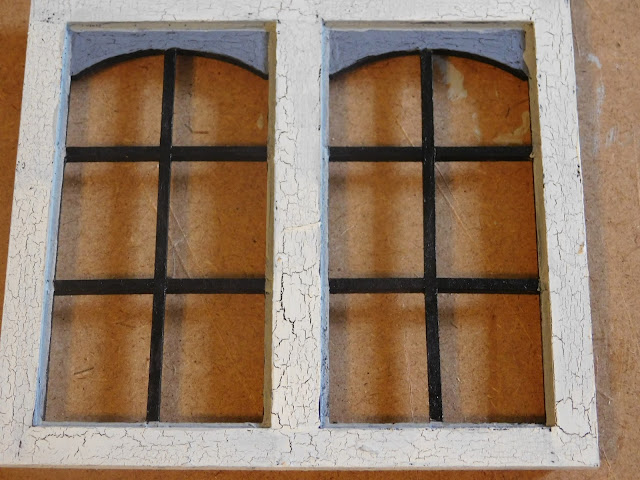 My paint job isn't perfect.  But it's not really one of my skills.  And let's face it, is anyone going to get close enough to the windows to see the slight errors in the grey/blue paint?

Not too terrible for a couple weeks work.

I'm working on the layout of the front room floor today.  I think I've almost got it.