We are not going live with the new accounting program Thursday morning so I didn't have to work on Saturday.

With everything that happened it might have been better if I worked.

It started out well enough. I was fooling around with the fabric for the bed curtains.  The pleats take away from the pattern as you saw in Saturday's post so I'll be using some aluminum foil and glue and other methods to give them some dimension.

I did figure out some trim to hide the curtain rods so at least I don't have to worry about making everything perfect.

I also added some trim to the bottom of the bed.  Here's a quick picture of it before. 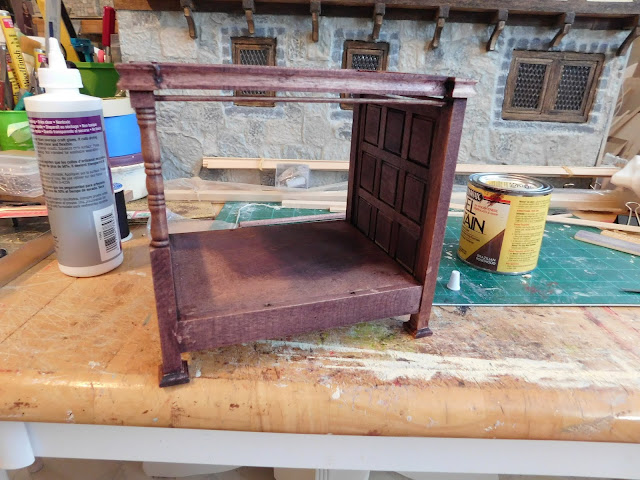 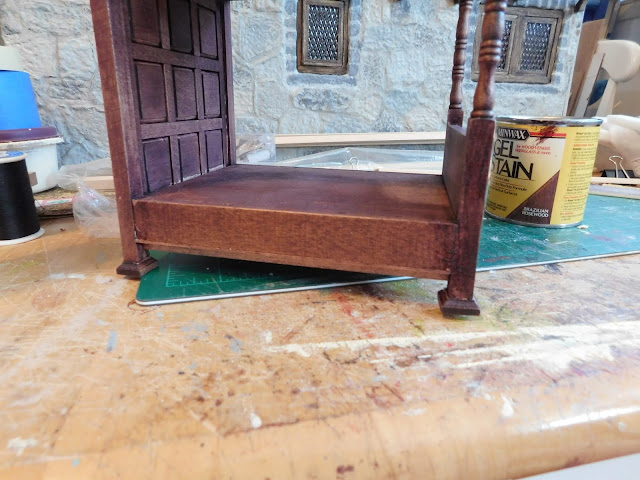 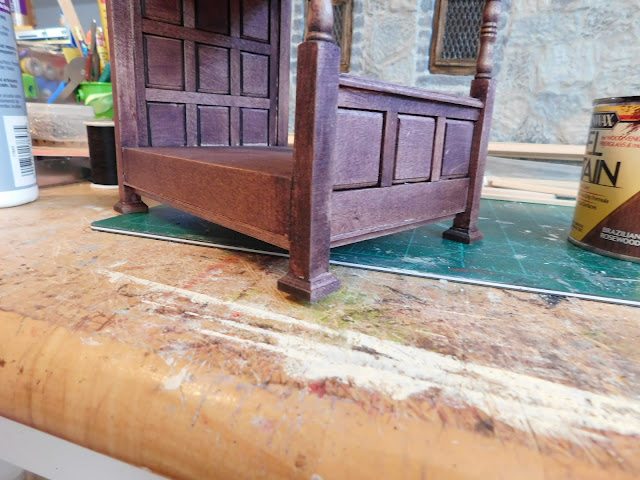 I stained the other pieces but I won't add them until after the curtains are up.

Then I started to move the house around so I could mess with the wiring.  Catastrophe struck.  I'll spare you the play by play and just show you the result.  I'm sure you can imagine the cursing that went on during this. 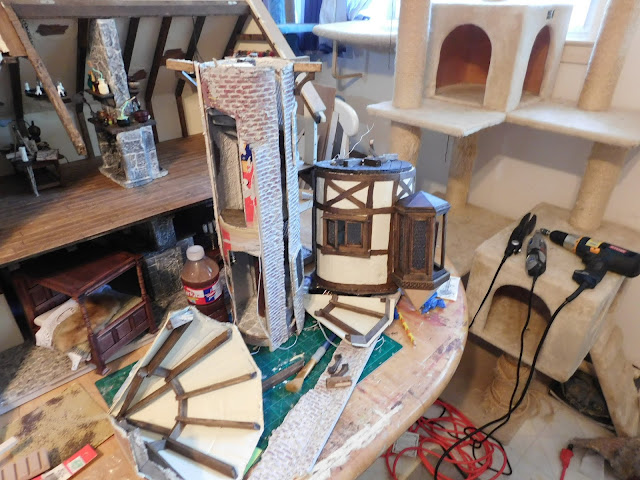 The cats pretty much stayed away from me after that.  It wasn't their fault, wasn't even anything they did.  But I don't get mad like that often enough that they're blasé about it.

I spent the next portion of my day putting the tower back together. 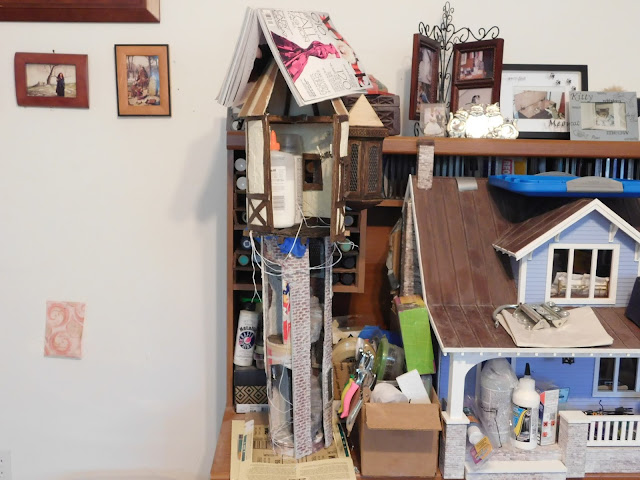 Notice it is well away from the rest of the house so I can't tip it over again.  I just hope it isn't crooked.

Once I managed to fix what I broke I started to figure out the lighting/furniture placement for the bedroom. 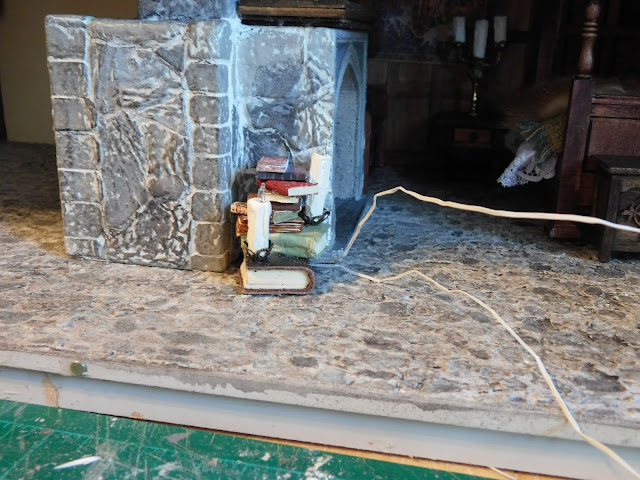 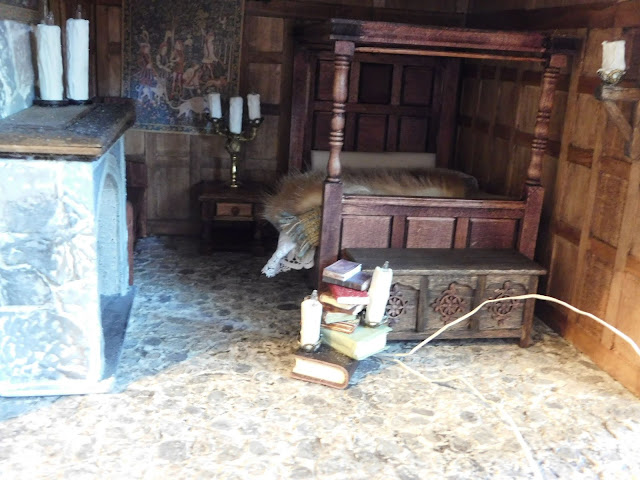 I wasn't sure where to put the pile of books, but I decided on the spot next to the fireplace would make more sense.

The tapestries stayed up, so that was a bright spot. 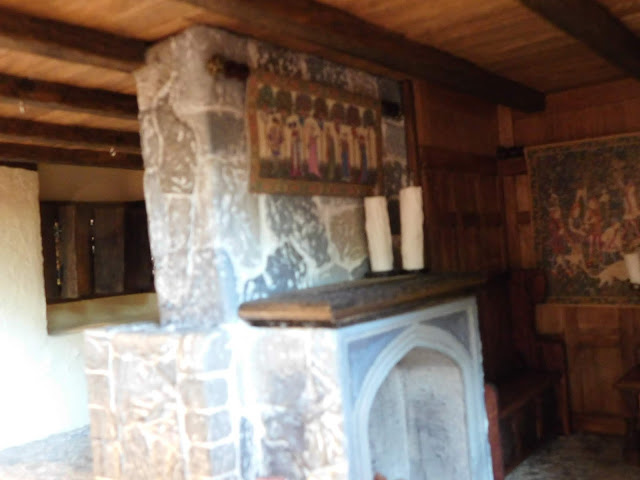 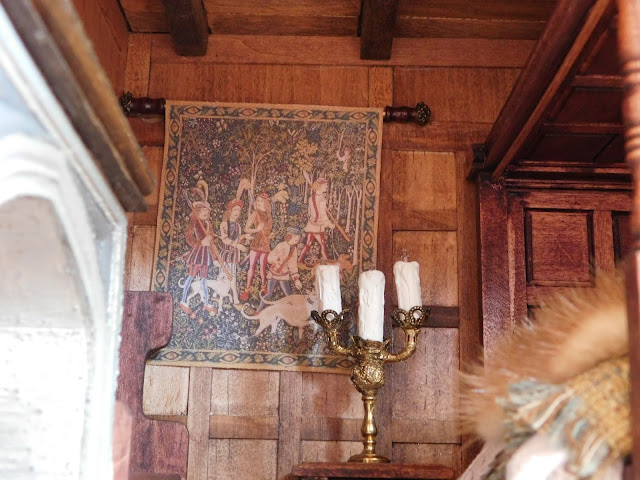 I added a shelf and some jars to the kitchen chimney. 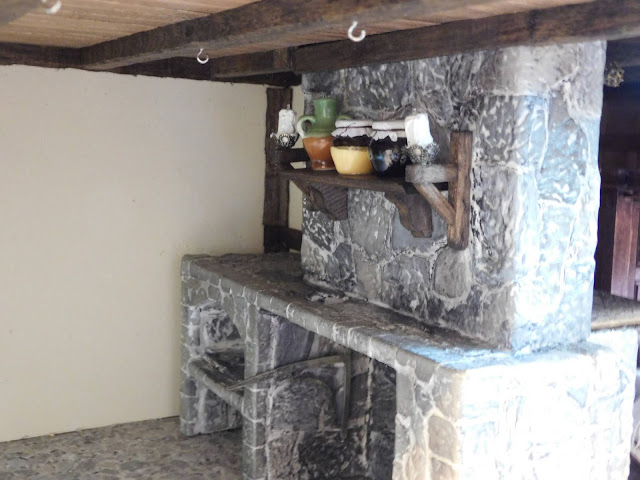 I figured out where I wanted to place the kitchen table so I could drill a hole in the floor for the wires. 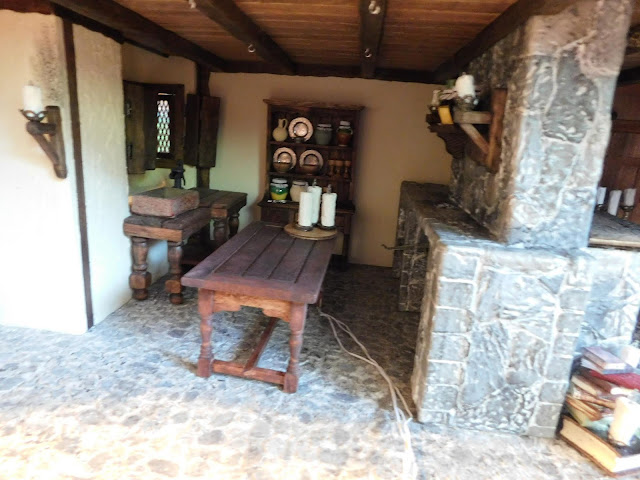 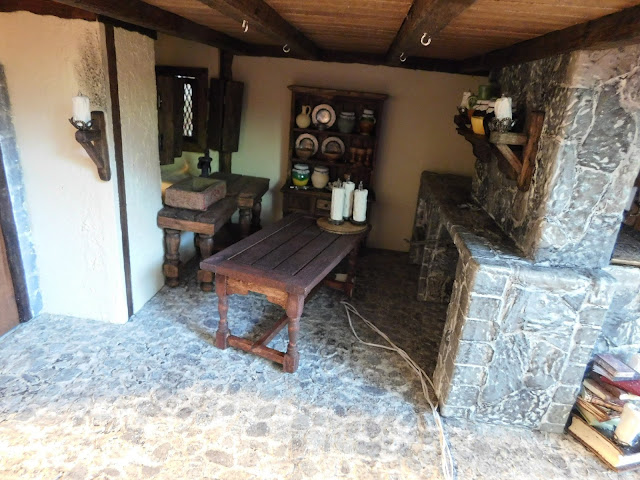 Even if I want to slant it a bit I didn't glue it down so I can move it slightly.

And I tested my lights.  And they worked which is nice. 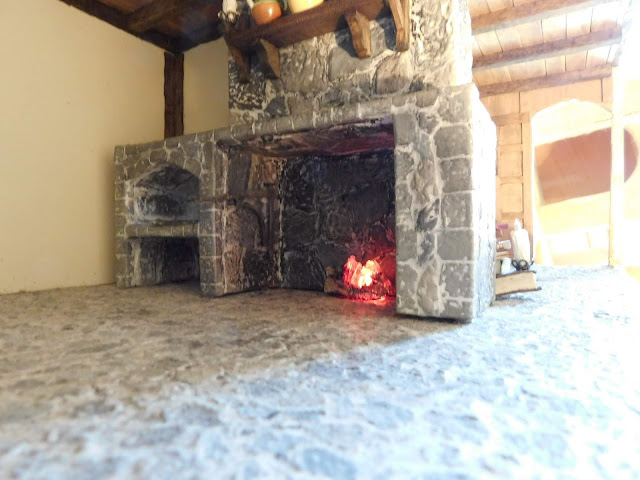 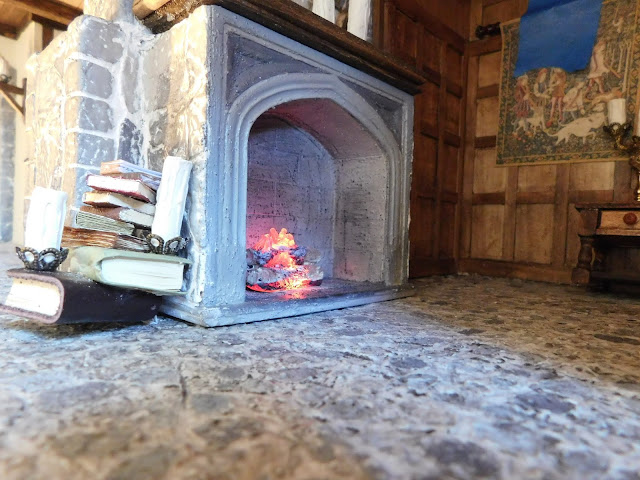 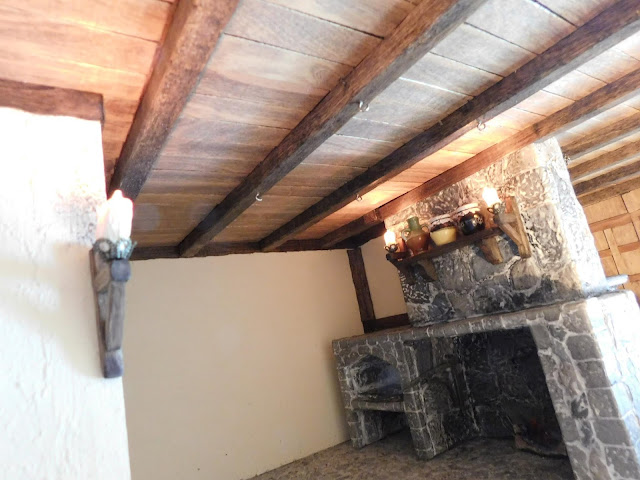 And a nice view of the ceiling.

I put the house on it's side and extended the wires so they'd go out the back.  That's always fun. 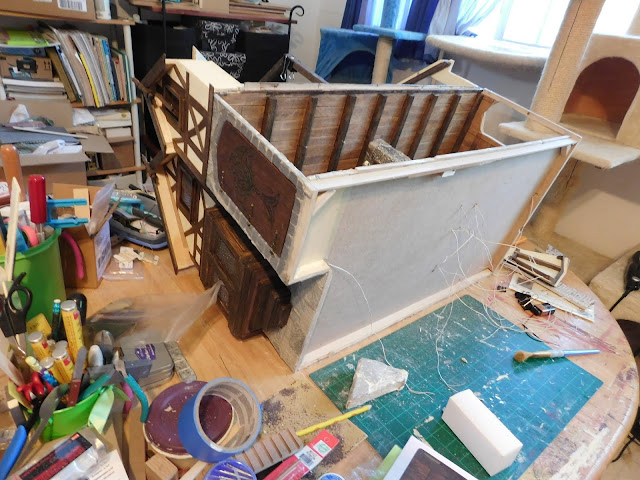 I got my base built and decided that I'd put off gluing the house to it long enough.  And maybe it the tower was glued to something I wouldn't be able to topple it over and break it again.

Of course the minute I got the area cleared on the table and the house glued to the base someone had to look around. 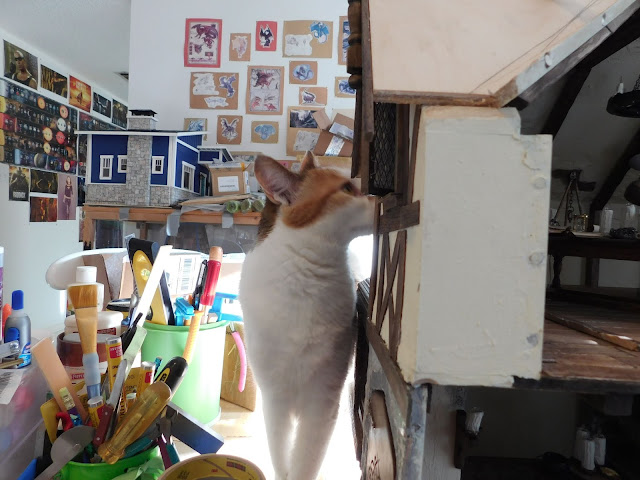 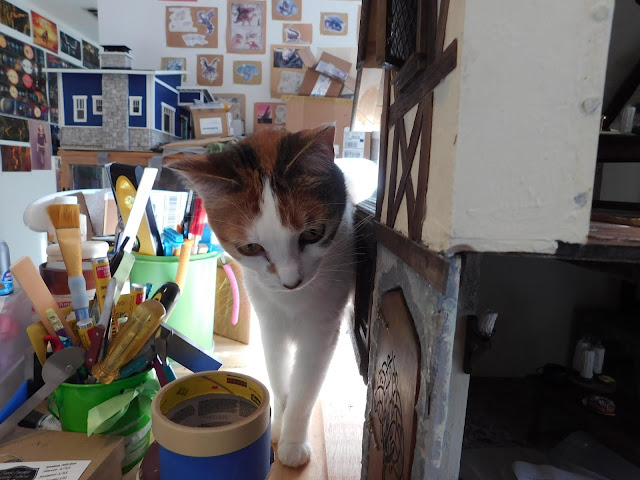 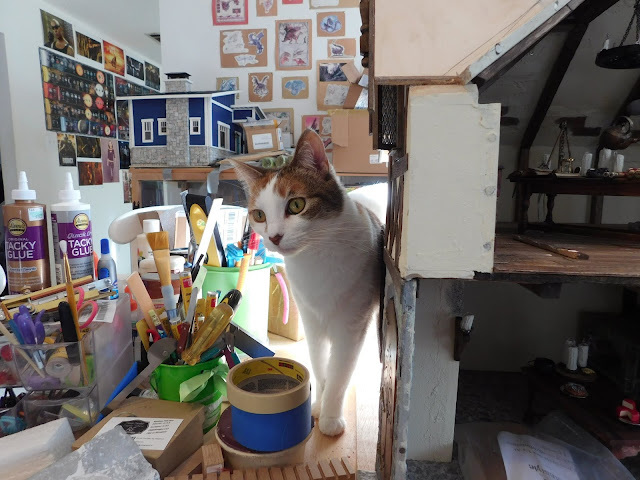 Thankfully she didn't try to climb inside.  But this is the reason the dollhouse gets closed up each time I'm done with the work on it.

So the next step is to make the hallway between the stair tower and the rooms.  I got that mostly done for the first floor. 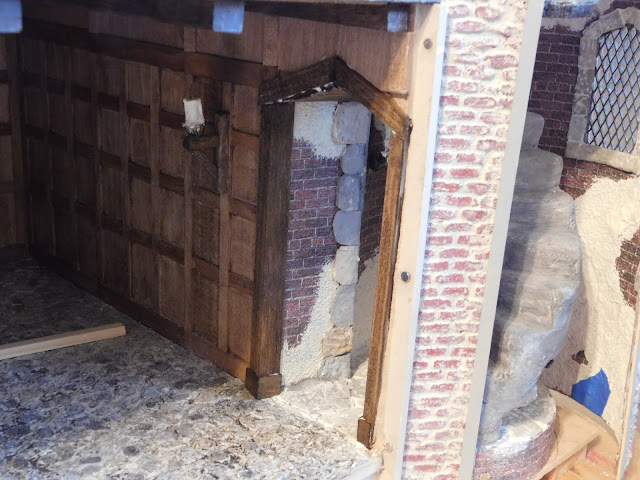 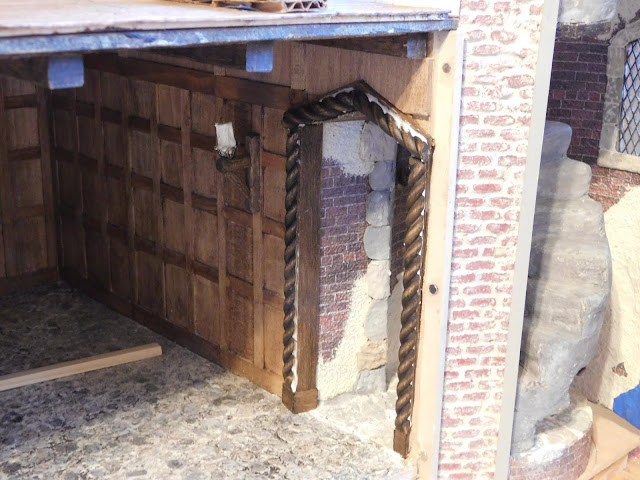 I used the brick paper from the inside of the tower and some plaster to give it the same look.  And I got started on the floor for the second floor hall.   I'll work on the rest of that next weekend.  Hopefully I'll have an update on the bed curtains then too.

The last thing I did was glue the front step in place. 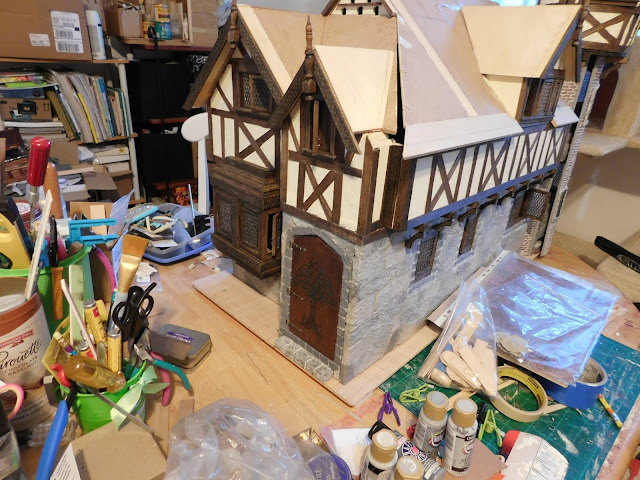 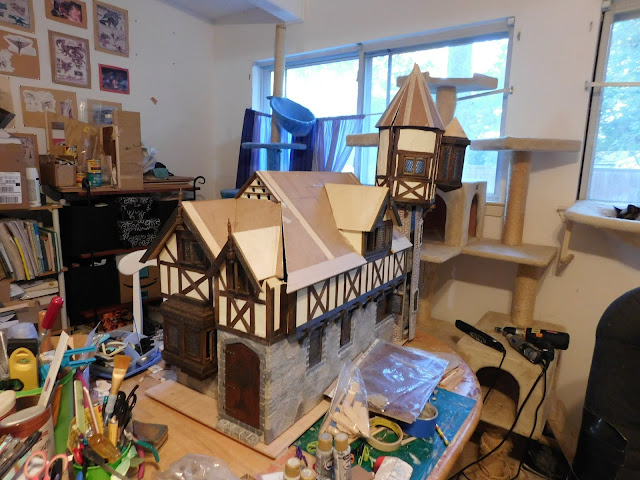 Is it me or does the tower look crooked?

It's going to drive me crazy, I can tell.

But for now I'm done.