I know I talked about doing earth tones for my NOLA house.  But I fell in love with these cushions from Otterine's Etsy shop. 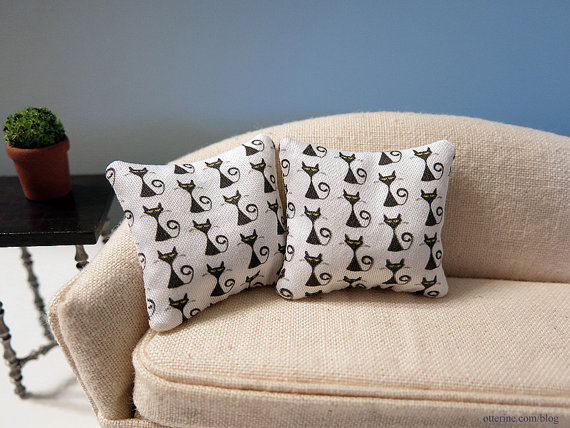 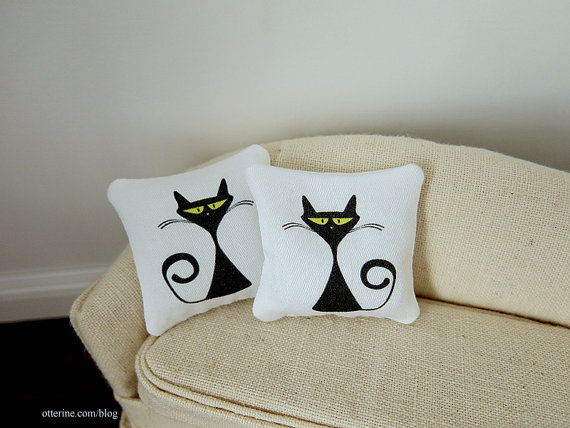 And I've got a really nice red couch from Elf Miniatures.  So I'm thinking nice dark brown woodwork, walnut or mahogany stained.  You remember my flooring? 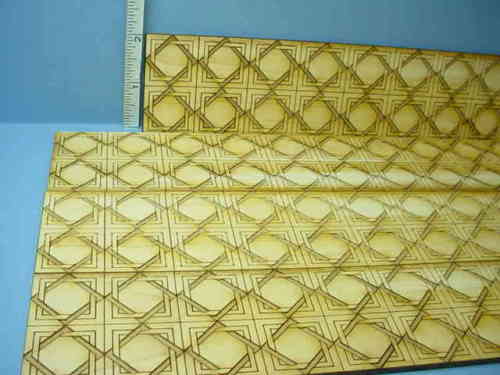 And I found some gorgeous wainscoting... I think the designs will be a nice contrast to the geometric pattern of the floor. 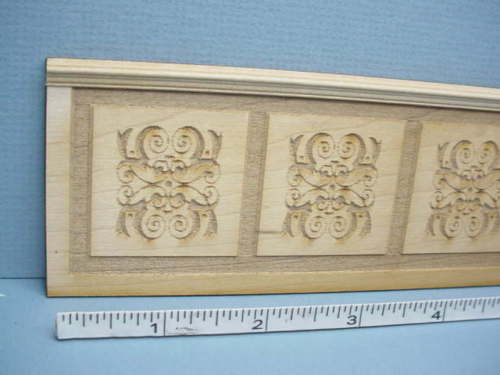 I'll do baseboards to add a little height to the wainscoting. 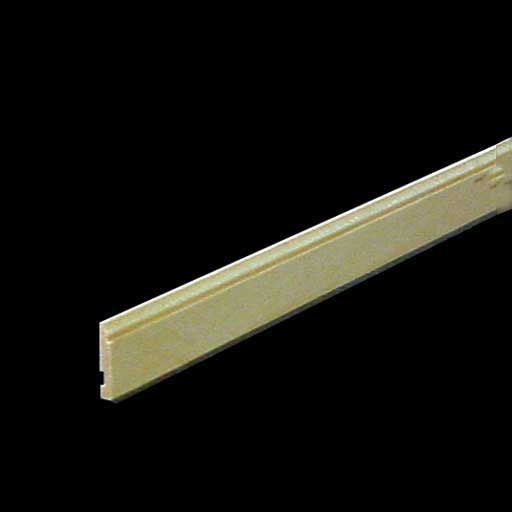 Now here I'm not quite sure...I'm thinking a nice black and white toile... 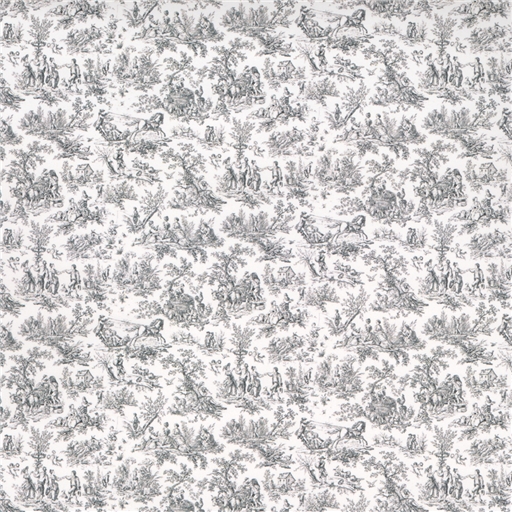 It'll go with the New Orleans theme, toile is very traditional, but I don't want everything to be too stark.  So I'll need the curtains to soften the whole effect.  Maybe something in a dark red?  Or a soft grey with red trim?  Not sure about that yet.

I've got some black and white tile for the kitchen floor.  And I'm hoping to make the cabinets.  I got the idea from Cramped Quarters... I love how the kitchen turned out.  Despite the title of the post. 'Kitchen Nightmares'.  So I bought some wainscoting panels that I could use for cabinets.

I want a small kitchen in this house, so that means narrow, more like a galley kitchen.  And I'm debating about the idea a pass through window between the kitchen and dining room.  I'm not so sure about that really. 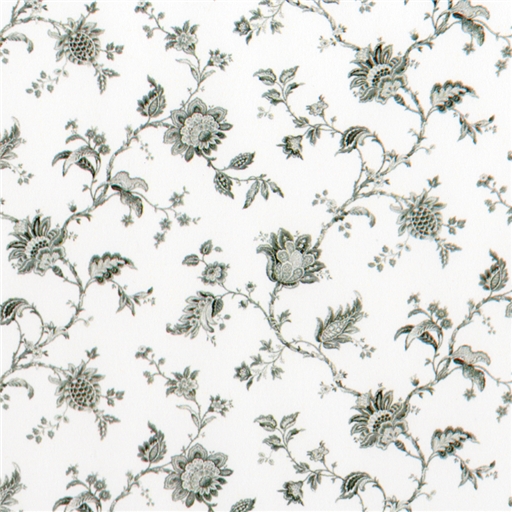 I'm not sure about this... White walls might be better.  With cheerful red curtains at the windows.  Maybe black appliances?  Red would make a nice pop though.  We'll have to see.

All the wallpaper I found at Hobby Builders Supply.  Including this.  Which would be gorgeous for the bedroom. 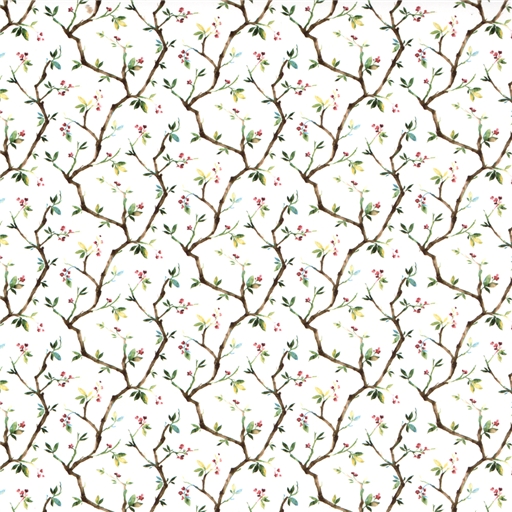 I love the dark branches with the touches of color.  And with the reds, yellows and greens it leaves a lot of options open for the bedding and curtains.   So I think this might be a keeper.

I'm planning on a herringbone floor for the bedroom. 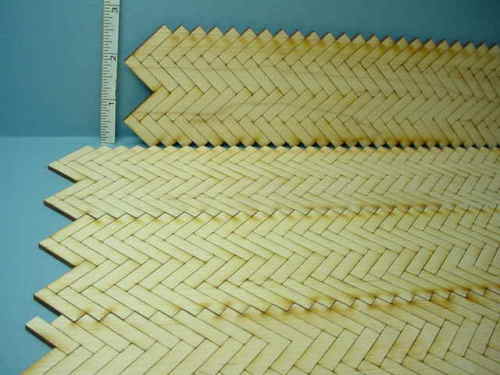 I've got some plain oak flooring to frame out the living room and bedroom floor.

I absolutely fell in love with this bedding set. 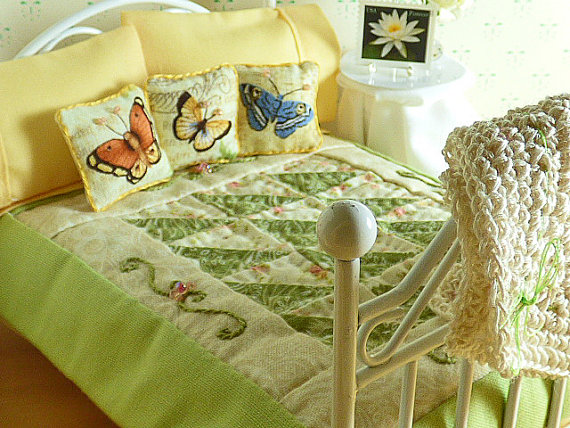 I love it...but I'm not sure about the colors.  It's over at TheLittleEmptyNest on Etsy along with this one. 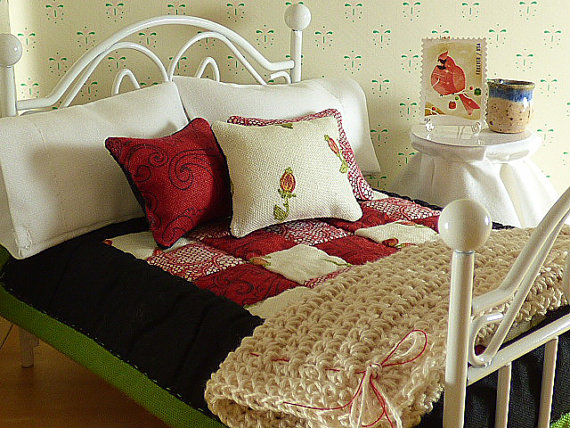 Which is also gorgeous.  But I'm not sure about how dark the colors are.  I might have to make my own if I can't find something I really love for the house.

Plus I was thinking of a Belter bed... 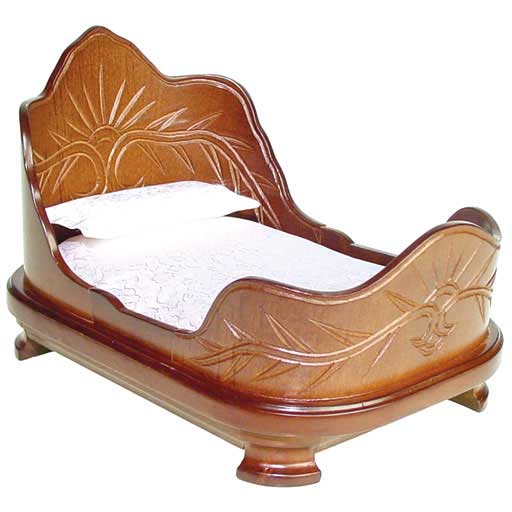 Though I'm not completely sold on it.  I've got a kit for a four poster bed and it would be nice to make something just for the bedroom.

Right now I'm working on my walls, getting my windows cut out and the siding on.  I've also been cutting out my bricks and getting my foundation done, a la Brae over at Otterine.
.
The other thing I'm debating is a fireplace.  I don't think I want the complication.  It means taking up a good chuck of wall space in the living room.  And though I've got a kit for a nice fireplace... I'm not sure.  So we'll see.

I need to make some heat registers too.  Kris has an awesome tutorial and I was thinking I'd use that.  I'd have to use the outer walls for it but the house I grew up in had the heat registers on both outer and inner walls.  Actually the outer wall grates might have been the cold air returns but for my purposes I'm not terribly worried about it.

Having Way Too Much Fun

Okay...as the post title suggests, I'm having way too much fun looking at pictures of New Orleans homes for inspiration.

I've been trying to nail down the external architectural details, window pediments, roofing, bracket/corbel styles...  At least that's my excuse for wasting three quarters of an hour at a time looking at pictures of different styles of homes in New Orleans.

This did start out as something fairly productive.  I was trying to find a style of pediment that wouldn't look odd over an arched window.  And the internet was such a help! 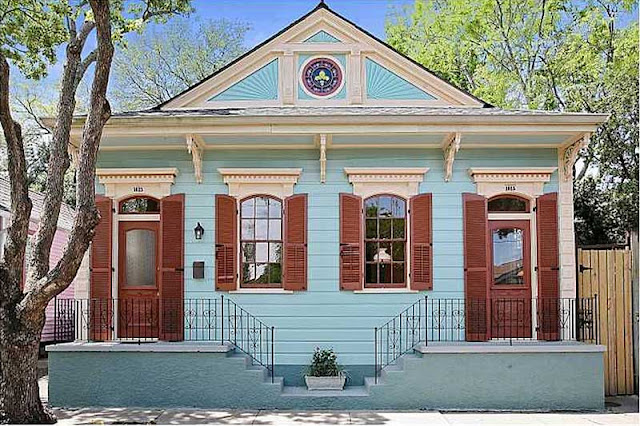 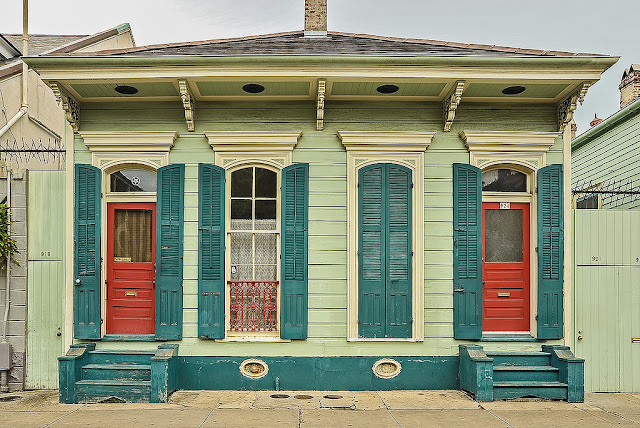 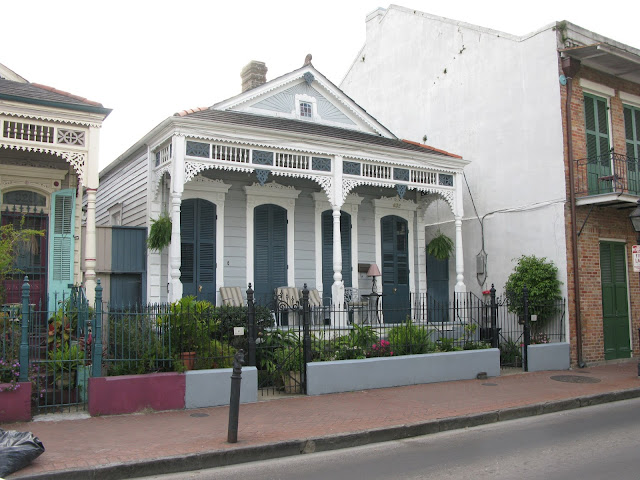 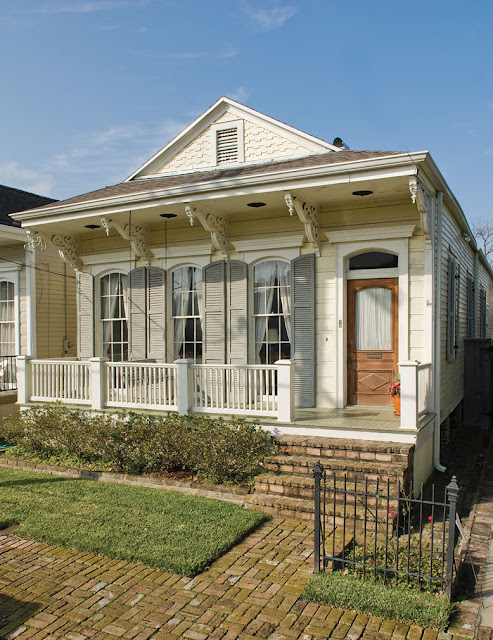 And it looks like a Yorktown style pediment will work pretty well.  I found some on Ebay that almost perfectly match the first picture.  So I snapped them up really quick, along with a couple of small Yorktown windows for the bathroom and maybe next to the stairs.  That has yet to be decided.

I also started looking at what sort of siding the homes in New Orleans typically have.  I haven't seen a lot of brick homes.  Foundations yes.  But an entire house?  There were some buildings on Bourbon street but I didn't find many traditional row houses out of brick.

What I did find was siding.  Not clapboard though.  I think its batten and board siding? Anyone know? 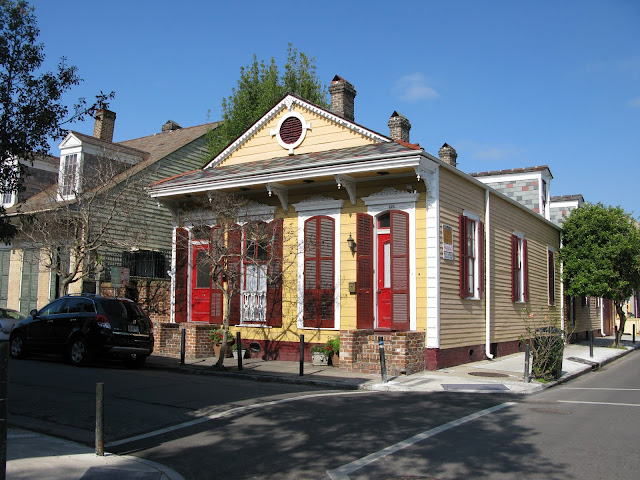 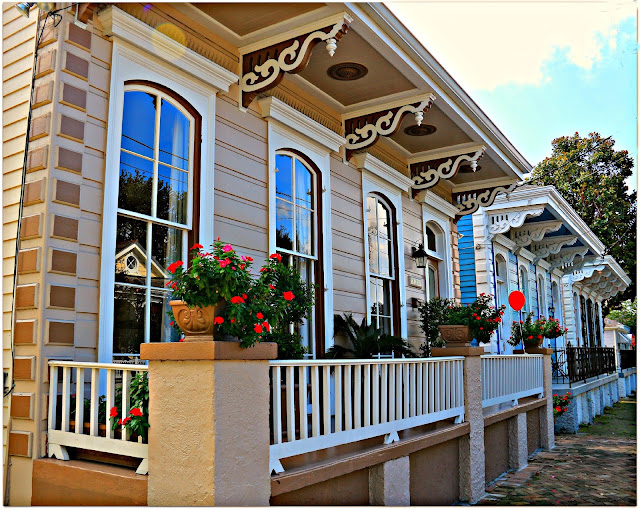 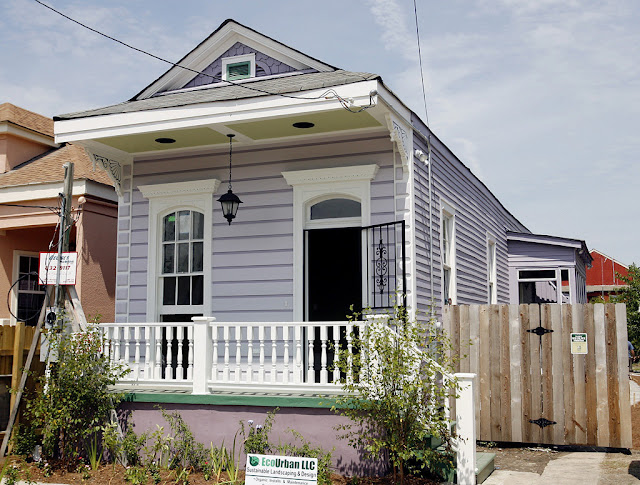 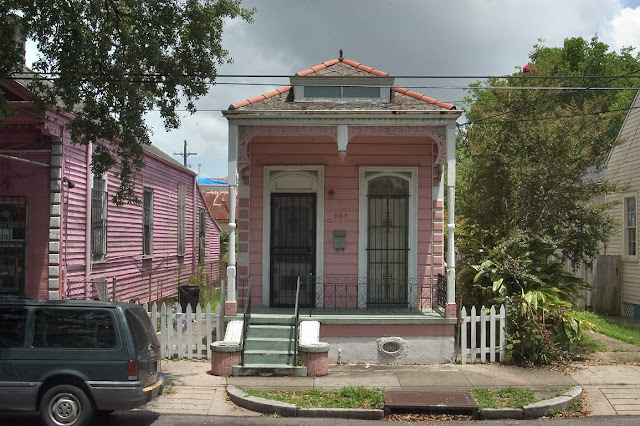 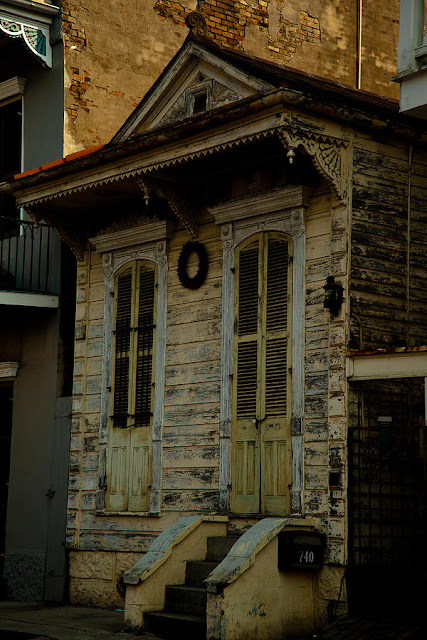 The second and third pictures have that pretty corner detail that I like and it goes so nicely with the curved windows and simple pediments over them.

I've been debating shutters but I don't think I want them.  For one thing, I have some double windows and shutters won't look the same with them.  Plus there is such a thing as too much detail.

And the detail I really want and I struggle to find are the brackets.  The homes I'm looking at have those gorgeous filigree supports for the porch roof/balcony and reproducing them in miniature is going to take some work. 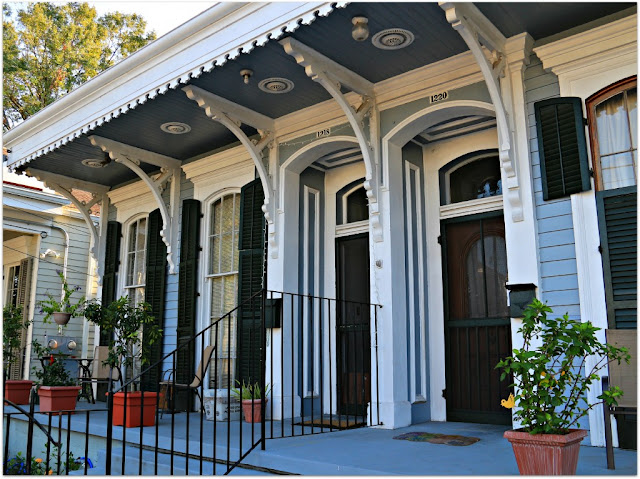 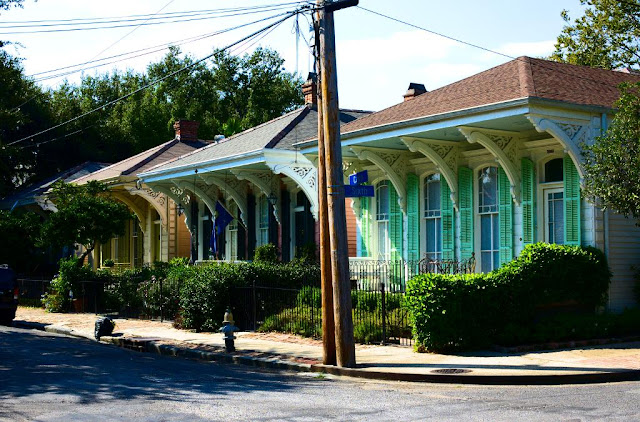 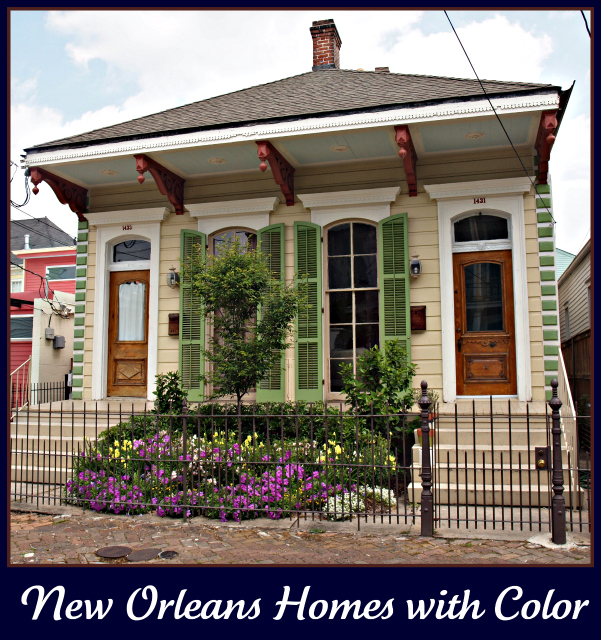 This last picture has a lot of color (and helpfully captioned noting it).  Not sure I want to do this but I do admire all the details, arched windows, pediments, shutters, corbels and siding without overwhelming the house.

So I did order some siding in that style with the cool 20% off coupon Miniatures.com sent via email.  This weekend I have to run some errands so I'll be making a trip to the Hobby Lobby or Home Depot for the wood for the dollhouse.

I also want to keep an eye out for some half scale fishscale shingle strips because that would be some nice detail along the roof peak.  Kinda like this... 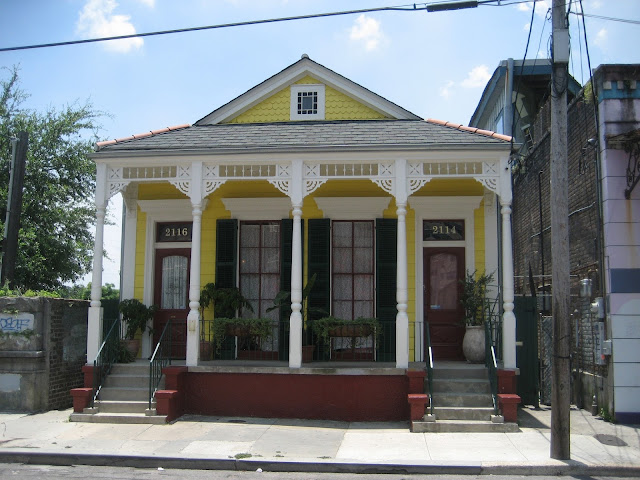 See what I mean?  It needs something to make it pop...and I'm a little worried my circular window will be too big.  I might have to make my own window in a smaller scale.  We'll see.

Thankfully roofing doesn't seem too difficult.  Though I find the combination of regular shingles and clay curved shingles on the roof corners a little odd.  They're in several pictures and they're all the same orangey clay color irregardless of the house color.  Weird right?

The other debate is whether or not I should use wood for the walls or get some foamcore board and use that.  It's certainly lighter and easier to cut.  And if I use wood siding for the exterior it would be sturdy enough.  My tools don't run to table saws or drill presses so the more forgiving my work materials are the better.

Suggestions?  I've seen some great tutorials about foam core and card stock over on Kris's site and I'm planning on bookmarking her one on making windows until I have it memorized.  I think that'll be the only way I can recreate windows to match the kit.

So wish me luck this weekend!

Getting a project started from scratch is never easy for me.  At least with dollhouses.  The last one didn't go quite as well as I'd hoped and let's all just pray that I learnt from my mistakes on that one.  Strangely enough, starting a new story is the opposite. I'm always overflowing with ideas that pour themselves onto the page but peter out after a while.

With stories, finishing is the hard part.  Plot, theme, character interaction, those all try to do what they want and corralling them into a finished story is a little like herding cats.

With the dollhouse... it takes me a bit to get going.  I've got some great inspiration photos.  Gorgeous shotgun houses down in New Orleans, beautiful two story homes with similar rooflines, and Bourbon street row houses with balconies that make me drool. 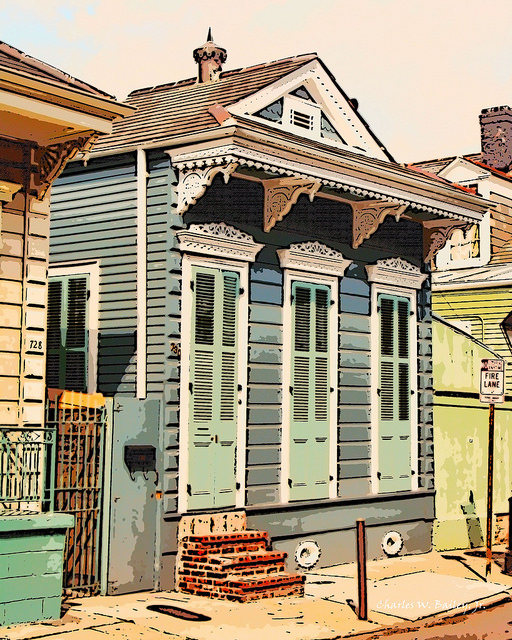 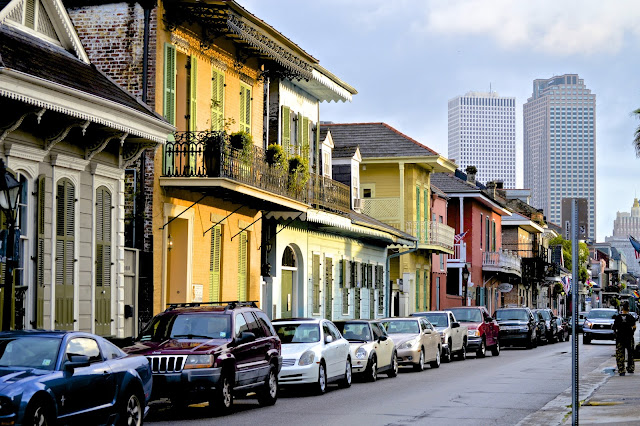 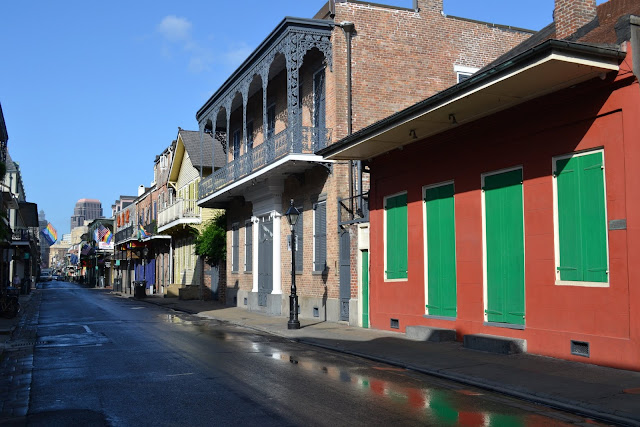 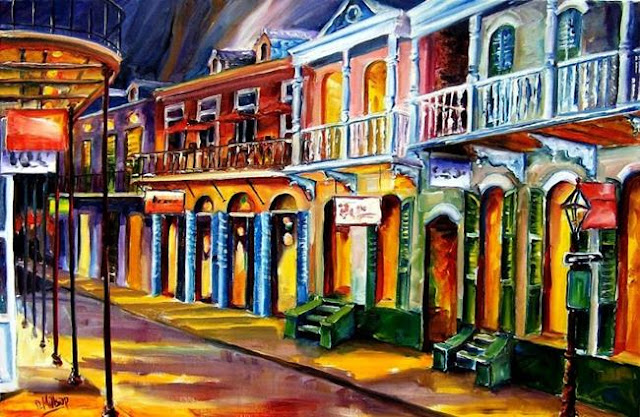 So obviously I've got plenty of inspiration about the outside right?  The inside, the overall theme of the house... that's a little more difficult.  But with some looking around and shopping I think I've got an idea.

The Architect's Abode was very modern.  To the point of turning the second bedroom into a studio.  It had very chic furniture thanks to the Etsy shops of Otterine and ModPodMiniatures.  I want something a little more blended this time around.  New Orleans is this crazy, wonderful place with plenty of history but updated for modern living.

So I want the house to look as if it has history.  And I think the trim, moldings, floors and railings will be the way to establish that.  The furniture will follow, comfortable but still elegant enough that it doesn't look out of place.

The kit comes with those gorgeous windows and doors, and really that's what sold me on it.  I don't like how low the ceilings are or how small the original footprint is, but those windows and doors just called to me.

I liked how they had the cross bar but the curve at the top of the window was very modern.  The curve softens the effect of the windows.  So taking that as a jumping off point, I decided to go with a combination of angles and curves.

So here are some of the things that will establish the character of the house.


Otterine did this gorgeous patterned floor in her Haunted Heritage, Grandma's Parlor... And I'm hoping to do something similar for the NOLA House living room/dining room.


The stairs call for a ten inch wall for the lower level which is just about how I like it.  For the second floor I'm going with a nine and a half inch wall.  It's about an inch higher than the kit calls for but in order to have a balcony that won't look super cluttered or closed in, I need a higher ceiling.

I feel for the railing right away with the combination of curves and angles.  The diamond shapes match the floor and the curves echo the tops of the windows.

For these stairs I don't think I'm going to build a wall and a hidden bath.  Shotgun houses tend to have a lot of open space so I'm going to leave the space beneath them open.

I thought about using the bead board for wall paneling but I didn't want it to be too dark or busy, considering the geometric pattern for the flooring.  I have three pieces about this size in cherry wood but I've got some larger pieces in plain old bass wood and I'm planning on using them for the ceilings rather than plaster/paper.  The second floor will have a half attic over the bathroom with a higher ceiling in the bedroom.  And I'm debating doing an attic door like Otterine's.  Given that the hidden stairs I found on Ebay are more than twenty bucks.  That's a lot of money for an attic you can't even stand up in.

At least that's the current plan.  I love the look of dark roof beams with beadboard paneling between them so I'm going to do that for the bedroom ceiling.

Flooring for the bedroom will be a bit simpler.

As for furniture, I'm hoping to make a lot of it.  I've got a bunch of kits and some good ideas for the kitchen.  I'm flexible on colors but I was thinking of something earth toned.  Browns, golds, with pops of red maybe.