This weekend was full of time consuming things that didn't lend themselves to much picture taking.  I wanted to get the floor of the first level started at least.  I didn't know how long it was going to take but I figured it would be a while.

I added some wood to the floor to fill in the slots for the original walls.  And added the front stoop as well.

I used some of the Magic system stencils again.  These were much easier to use, less issues with the 'stone' parts coming out with the grout stencils.  It was also easier to get the stone mixture onto the floor since this wasn't vertical. I actually tried to make the levels of stone slightly irregular since the main floor of the cottage is the oldest part of it. 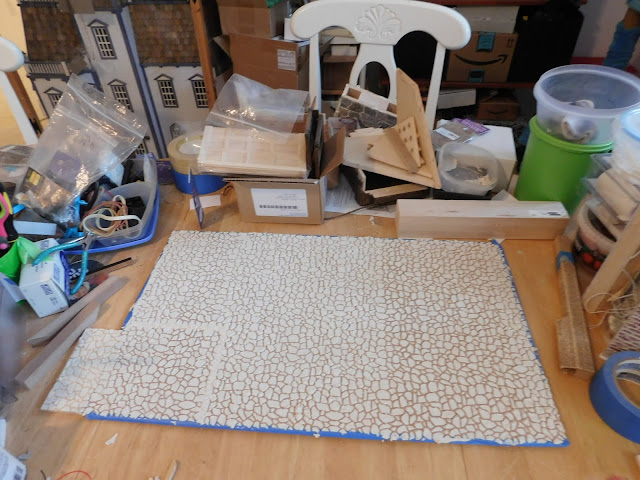 While it was drying I got started on my smaller candelabras.  I used some dowels for candles, cut down and drilled down the middle, then painted white.  While those dried I cut out my wood and got channels for the wires drilled out and the wood sanded and stained.

I used my hot glue trick so they'd look like melted wax and painted them out.  Some more jewelry findings serve as the candle holders.

By the time I got all that done the stone was dry so I started painting.  That took quite a while. 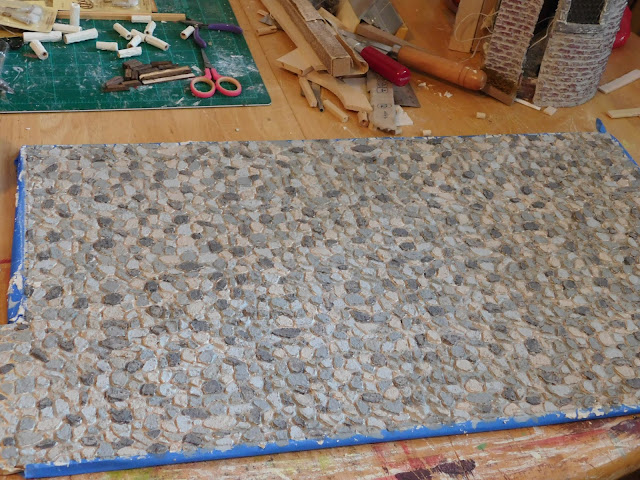 Once it was painted I coated it with a satin poly and let that dry.  Then I put the candelabras together.  I need to trim some of the glue off but all in all they look pretty good.  Primitive, which is what I was going for, for the first floor. 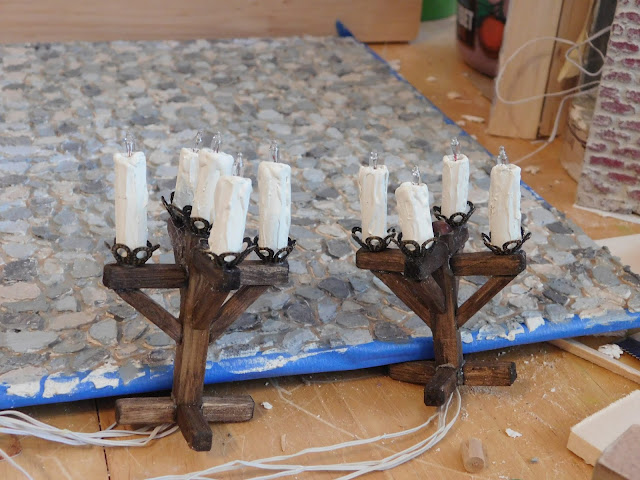 Then I got some of my grout and finished the floor.  I have most of the grout wiped off but I'm going to let it dry completely and then wipe a bit more off before I coat it with poly again. 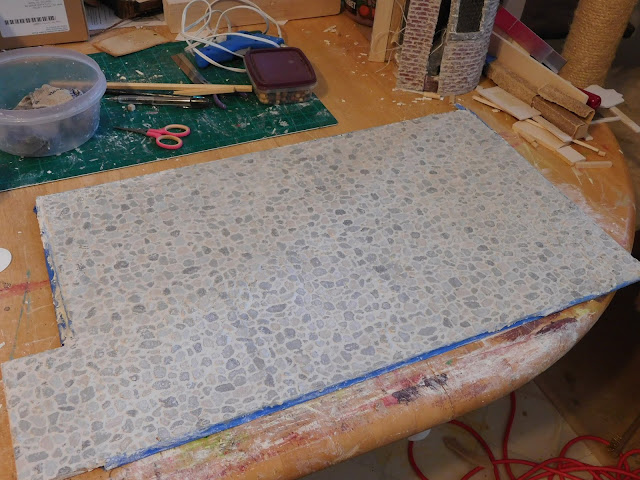 Once I get the poly on it I'll take off the painters tape and do another fit of the walls to make sure everything fits the way I want it to.  After that I'll carefully drill through the plaster where I'd made holes for my electrical.

It doesn't feel like much but I know it is progress.  And I can cross a couple things off my list.


Cut bricks and stone for outside of lower walls and tower.


Add grout to stone and brick.


Ceiling beams and roof support for the tower.


Build base for house.


Make lake/river to go alongside house

I try not to do that too often because I really can't work to much on minis during the week so I try to do the writing then.  But sometimes it just happens.

I needed to get all the stone on the fireplace and painted. 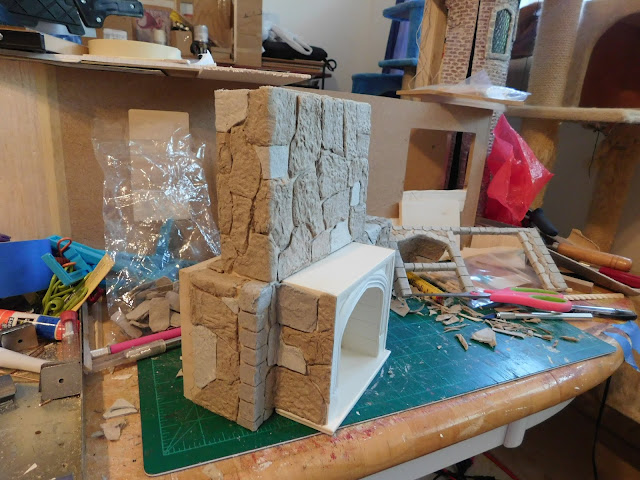 I like to paint once the stone is on the build because I can adjust the colors so they look more varied.  Then I coat the painted stone with a satin polyurethane to protect it from the grout. 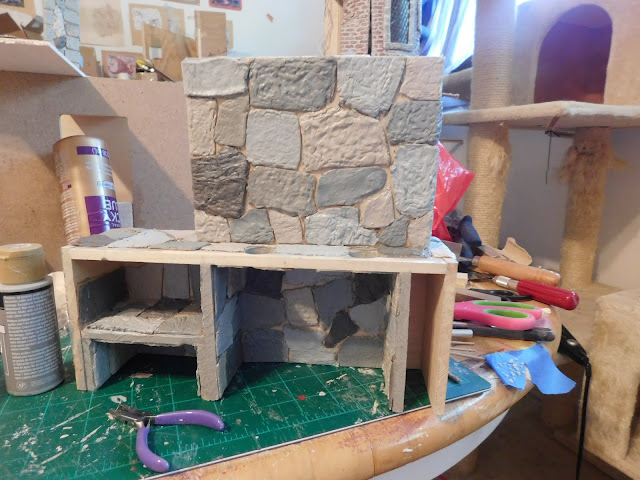 I'd bought a resin Tudor fireplace for the bedroom and to give it a little more texture so it would look more like stone I added some of the sugar paste to it.  Mostly on the hearth and the brick backing  but a little on the front carving. 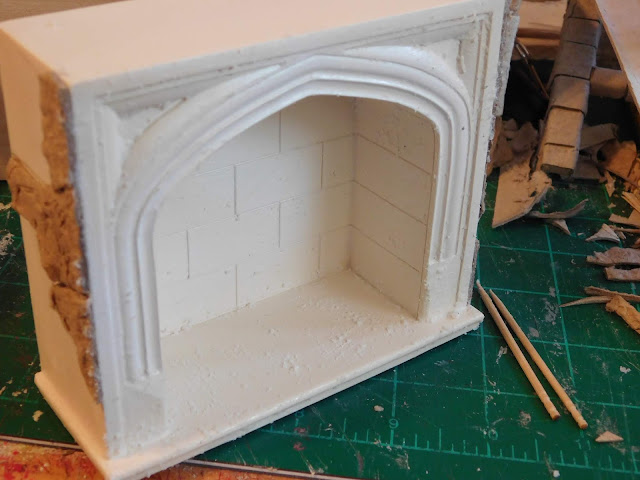 Once I painted it I added the satin polyurethane to it as well. 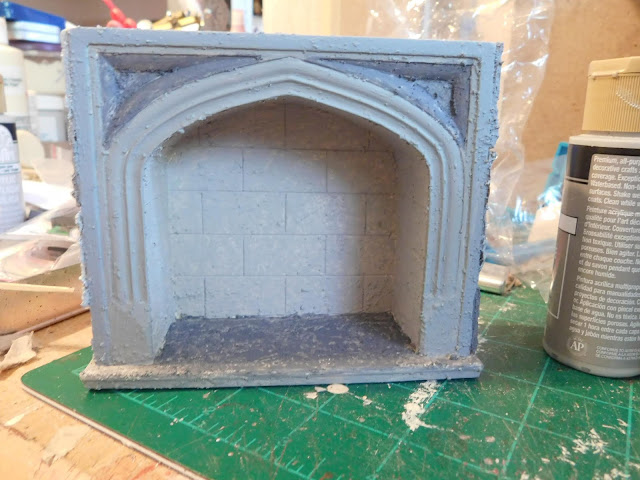 The grout I like to use is the Greenleaf Stucco and a little can go a long way so I've been trying to not mix up too much at once. 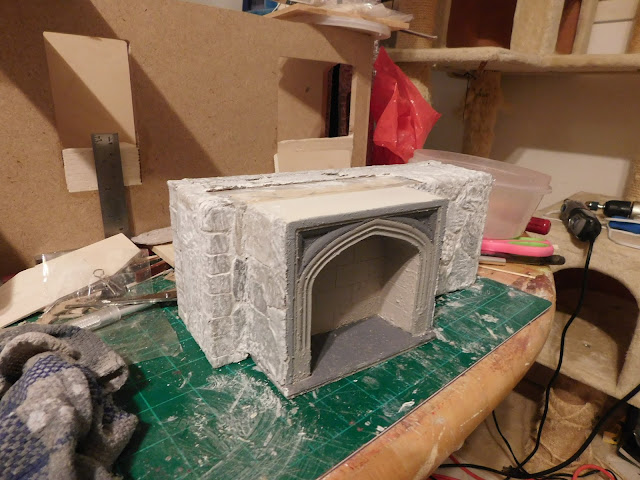 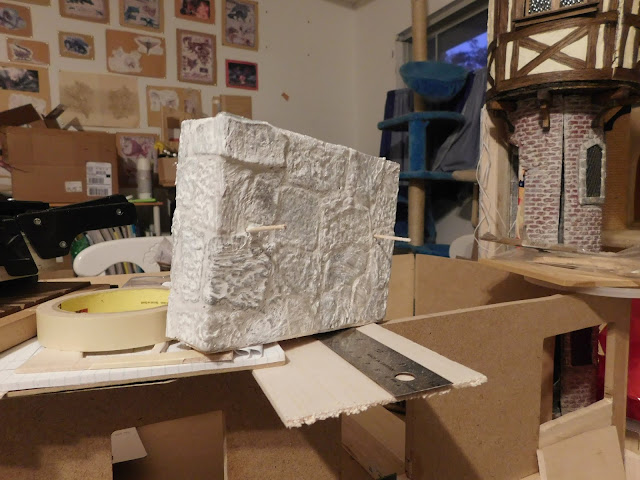 I wiped of most of the grout but I needed to let it dry overnight so in the morning I got a wet cloth and wiped more of it off the stone so the stone didn't look so pale.  Then there's another coat of the satin polyurethane. 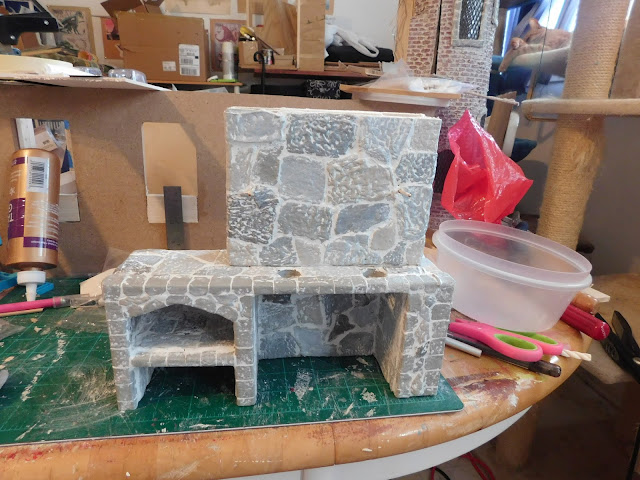 Waiting for that to dry I decided to work on my sconces. 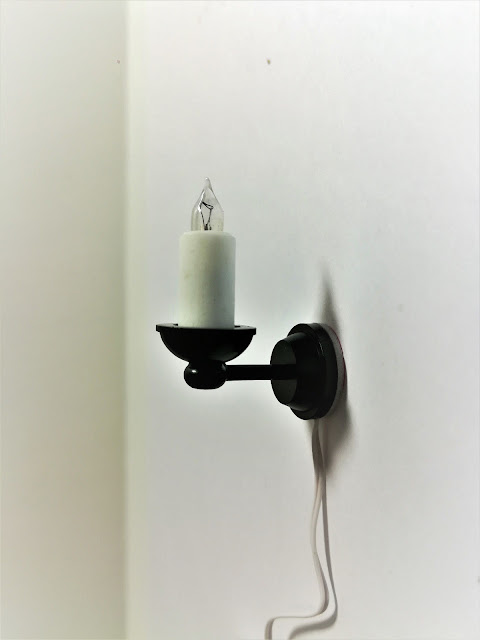 The more I looked at the sconces I'd bought the less I liked them.  The description said 'Tudor' but they looked too modern to me.  I took them apart and used the candles but made some new holders for them with drippy wax.

So they'd be more in keeping with the first floor of the cottage I made them out of wood and metal, similar to the standing candelabra. 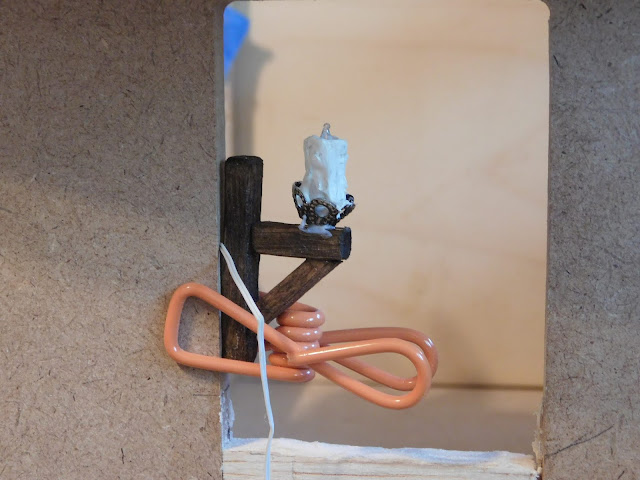 With the glue still drying I decided to add the pot arm to the fireplace.  And got out a few things I'd bought or it to show them off. 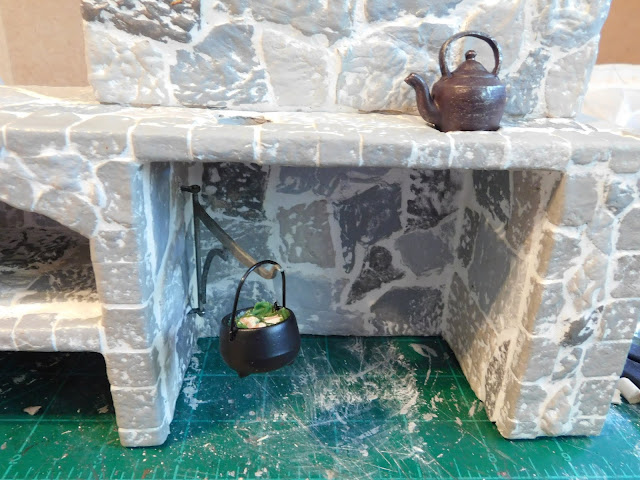 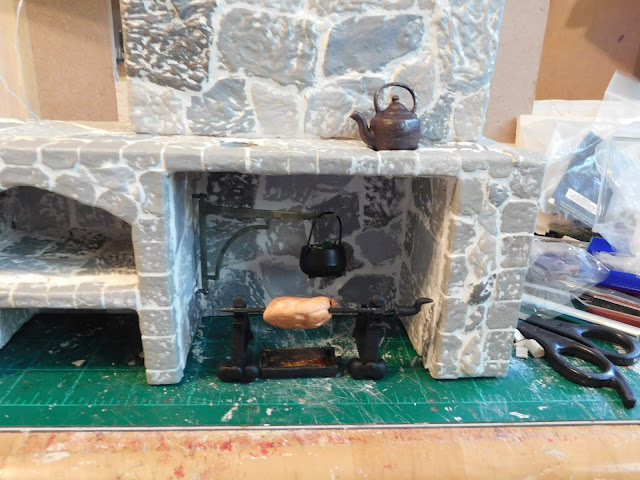 The idea is to have the fire behind the spit.  I need to make a couple of little holders to place pots and kettles on for the little oven holes in front of the chimney but I'm not in a rush to do that yet.

The glue was mostly dry on the sconces so I decided to test them.  And yes! They all work. 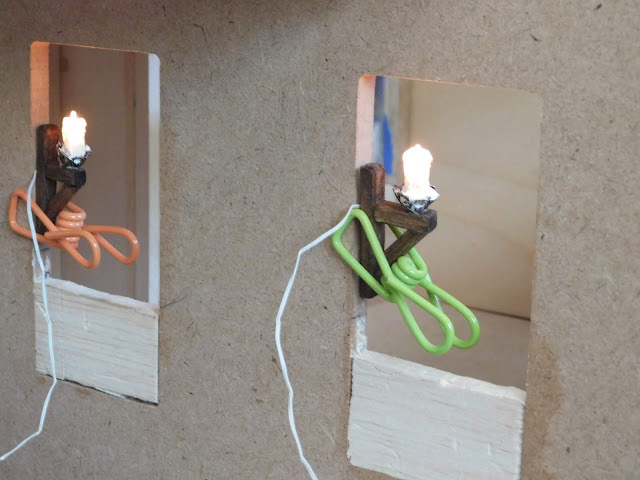 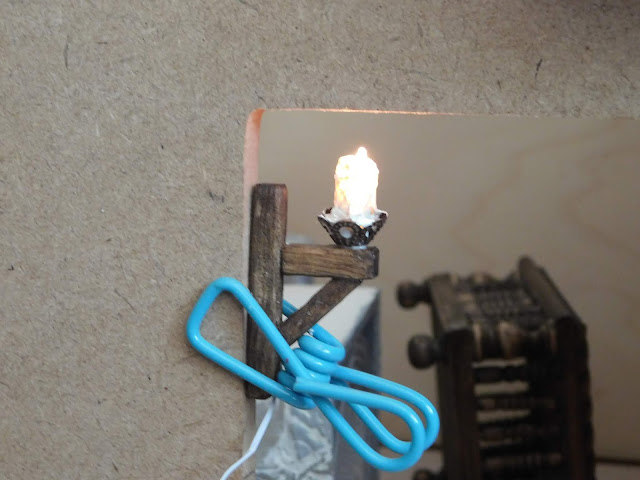 Then I picked two and attached them to the chimney. 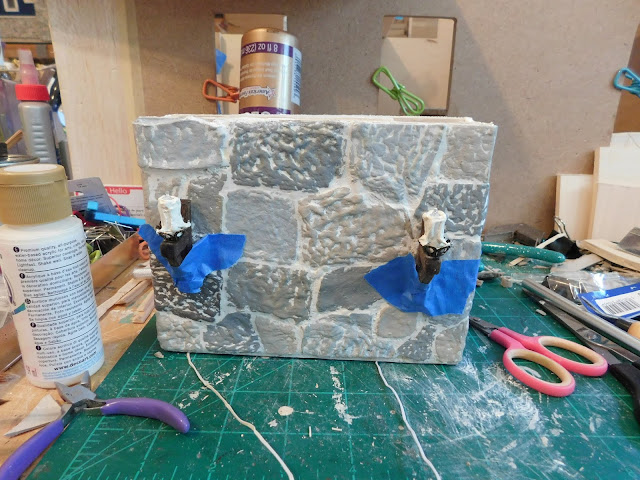 I'm going to wait on the glue to dry before I add the chimney to the fireplace.  So far I like how everything looks.

I have some jewelry findings and one of them would fit perfectly between the sconces on the fireplace.  I really like how it looks but I'm concerned that with the drying rack over the table that the kitchen will get too busy visually.  What do all of you think? 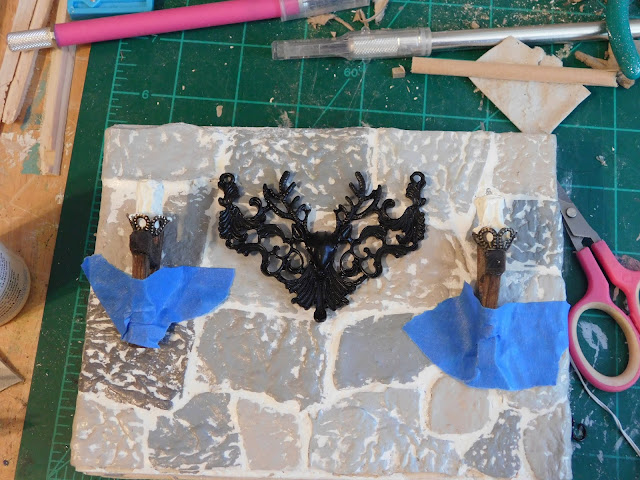 I'd need to take the loops off the top or make some dark nails to fill them and hold it onto the chimney.  It's part of the Fairy Tale section in Hobby Lobby and I just love the mystical look of it.

That's pretty much my weekend.  Hope everyone else is doing well.  I don't get to cross much off my list this time but I'll take every bit of progress I can get.